'Negosyo Serbisyo sa Barangay' up for completion this October 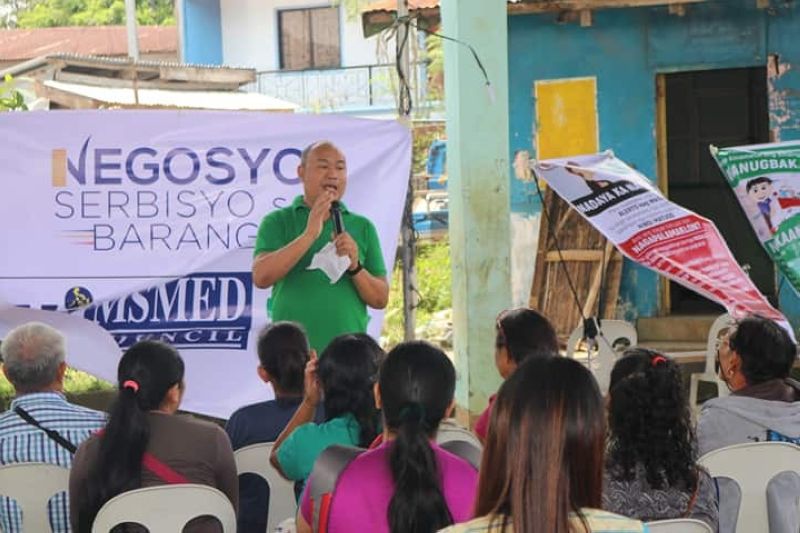 THE Department of Trade and Industry (DTI) in Negros Occidental targets to complete the implementation of the "Negosyo Serbisyo sa Barangay" program in the province this October, its official said.

Engiemar Tupas, senior trade and industry development specialist of DTI-Negros Occidental, said they are scheduled to conduct the last activity in Barangays West and East in Candoni town on October 23.

The two barangays form part of the nine recipient-barangays of the program in the province with about 1,000 potential and existing entrepreneurs as beneficiaries.

"By this month, we can be able to fully cover the identified recipient areas in the province," he said, reiterating that "Negosyo Serbisyo sa Barangay" mainly aims to bring the services of the agency to the countryside.

On September 17 and 27, respectively, a total of 248 potential and existing entrepreneurs benefited from the program in Barangays Bunga and Igmaayan, both in Salvador Benedicto.

Earlier, DTI-Negros Occidental already catered to about 500 recipients in five barangays of San Enrique and Valladolid.

The first activity was conducted in Barangay Tabao Rizal in San Enrique on July 24 covering 127 recipients. It was followed by Barangay Sibucao on July 25 with 131 participants.

On August 22, the program was brought at Barangay Central Tabao in Valladolid benefiting 130 residents. In Barangay Pacol, 111 residents availed the program Tuesday, August 27.

On August 28, the "Negosyo Serbisyo sa Barangay" was conducted in Barangay Ayungon, still in Valladolid, benefiting 105 residents. The program which was rolled out this year focuses on fourth to sixth class municipalities, specifically 20 percent of their respective barangays.

The mandate of DTI Secretary Ramon Lopez is to make the services closer to the barangays, Tupas stressed.

Part of the activity is the discussion on topics like entrepreneurship and provisions of Go Negosyo Act, among others.

The DTI is also inviting other government agencies to also present their programs and services to the people in the barangay.

Tupas earlier said that based on the initial results of the program, they observed that most of the people in the barangays are not yet aware of the programs and services of government agencies especially the DTI.

"We expect to increase the business name registration in the province after the full implementation of the program," he said, adding that DTI-Negros Occidental is upbeat that the program will spur more interest among Negrenses to start or expand their businesses.

The official also said "the program actually complements the agency's efforts to empower communities by enabling them to become entrepreneurs."