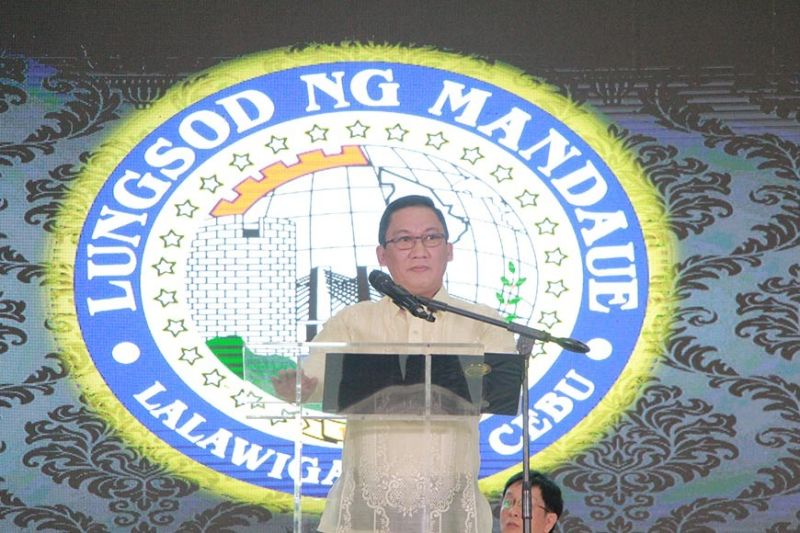 EXPLOITS. Aside from traffic, Mandaue City Mayor Jonas Cortes talks about gains the City has made since he took office, including establishing stronger ties with the police and addressing environmental concerns. (Contributed photo / Mandaue PIO)

THE Mandaue City Government will pour more funds into its traffic office and hire more personnel to address the city’s worsening traffic.

Mayor Jonas Cortes, during his State of the City Address (Soca) on Monday, Oct. 7, 2019, announced that the Traffic Enforcement Agency of Mandaue (Team) will be upgraded into a department instead of being a division under the mayor’s office.

He said Team will hire 300 additional personnel to add to its existing 200 employees. That way, more enforcers will be deployed on the streets to direct traffic and to apprehend traffic violators.

“I am confident that he will whip up our traffic agency into a proficient department,” the mayor said, referring to Team head Florentino Nimor Jr.

Cortes said the traffic problems always popped up during their discussions and deliberations.

Nimor, for his part, was grateful to the mayor for supporting his long-term goal for Team.

“Mapasalamaton kaayo mi kay at least, pareho kaayo mi og kanang hunahuna. ... One of the purposes nga nisugot ko sa hangyo sa mayor nga ako ang magdala sa Team, ang akong goal gyud is to make Team a department (I am very thankful because, at least, the mayor and I share the same vision. ... One of the reasons I said yes when the mayor asked me to head Team was because I wanted Team to become a department),” Nimor said.

During his Soca, Cortes cited the steps the City had taken to address the traffic problem like the rerouting of vehicles at the U.N. Ave. intersection and the strict enforcement of traffic laws by clamping and towing illegally parked vehicles and clearing roads of all kinds of obstructions.

“We are trying our best to ease traffic within our city, but since we are all part of the traffic problem we should also be part of the solution. I expect all of us to follow traffic rules and regulations,” he said.

Aside from traffic, Cortes also discussed the city’s peace and order situation.

He said the City Government has been strengthening its partnership with the police and enhancing their capabilities through donations of 12 high-powered rifles and vehicles to the Mandaue City Police Office (MCPO).

He announced that the City will purchase 11 additional sports utility vehicles and 22 motorcycles for the MCPO that will be delivered before the year ends.

Cortes also mentioned the successful opening of the new public market, the night market and the reopening of the slaughterhouse in Barangay Labogon, adding that the City has been strictly implementing solid waste management.

In line with President Rodrigo Duterte’s campaign against illegal drugs, he appointed City Councilor Nerissa Soon-Ruiz and his chief of staff, John Eddu Ibañez, to focus on programs that will help minimize and eventually eliminate the scourge of society.

The mayor also shared what his administration has done to address environmental concerns. He pointed out that the City had cleared the Tipolo Creek and passed the Mangrove Protection Order to protect the city’s remaining mangroves.

Cortes said the City has been waging an information and education campaign to teach residents about solid waste management. The City has also implemented an urban resiliency program that looks at the community’s capability to bounce back when a calamity occurs.

In regard to health, Cortes said Mandaue City has partnered with the University of Cebu Medical Center and Chong Hua Hospital for the establishment of a charity program that allows residents to enjoy the services and facilities of both establishments for a minimal fee or free of charge.

With the return of polio after the country declared itself free of the crippling and sometimes fatal disease 19 years ago, the mayor instructed the City Health Department to conduct an information and vaccination drive to prevent the disease from reappearing in the city.

Meanwhile, Cortes said the families affected by the fire that struck Barangay Tipolo last June have been taken care of.

“I am proud to announce that we have already distributed our financial assistance to our affected brothers and sisters in Barangay Tipolo amounting to a total of P12,805,000,” Cortes said.

Cortes also shared that he wants to improve the Mandaue City College by fully implementing Republic Act 10931, or the Universal Access to Quality Tertiary Education Act, to provide quality education to Mandauehanons.

Cortes also discussed the implementation of the Performance Governance System.

“It focused on and measured our efforts towards attaining our strategic goals such as making Mandaue City the primary source of high quality manufactured consumer products and staying true to our purpose of creating an environment for economic growth and a liveable society where governance is a shared responsibility,” he said.

“In the past years, we have proven that Mandaue could excel and be at par with the best in pursuing, measuring and sustaining strategic performance,” he added. (KFD)