Lam says Chinese military could step in if uprising gets bad 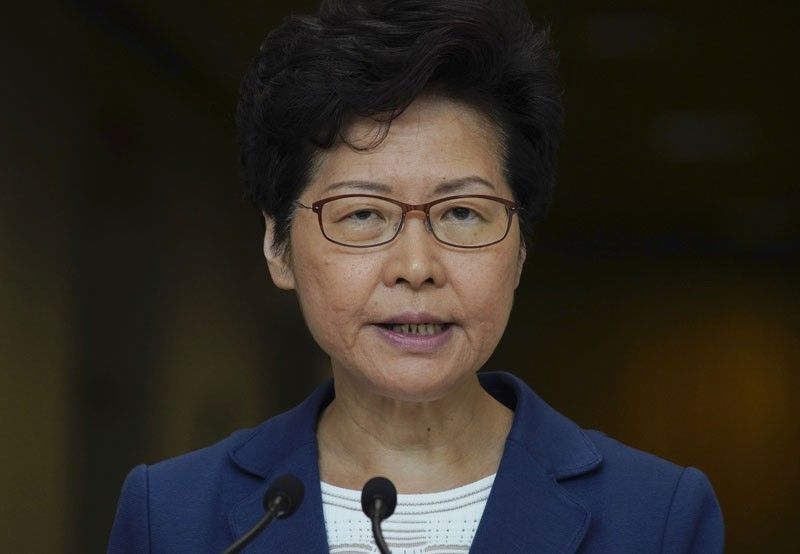 HONG KONG -- Hong Kong's leader Carrie Lam warned Tuesday, October 8, that the Chinese military could step in if an uprising for democratic reforms that has rocked the city for months "becomes so bad" but reiterated the government still hopes to resolve the crisis itself.

Lam urged foreign critics to accept that the four months of protests marked by escalating violence were no longer "a peaceful movement for democracy."

She said seeking Chinese intervention was provided for under Hong Kong's constitution but that she cannot reveal under what circumstances she will do so.

"I still strongly feel that we should find the solutions ourselves. That is also the position of the central government that Hong Kong should tackle the problem on her own but if the situation becomes so bad, then no options could be ruled out if we want Hong Kong to at least have another chance," she told a news conference.

The protests started in June over a now-shelved extradition bill that would have allowed some criminal suspects to be sent to mainland China for trial but have since morphed into a larger anti-government movement. Protesters said the bill is an example of Beijing's increasing influence over the former British colony, which was promised a high level of autonomy when it returned to Chinese rule in 1997.

The unrest had pummeled tourism and hurt businesses in the global financial hub, further bruising the city's economy as it grapples with effects of the U.S.-China trade war.

President Donald Trump on Monday urged Chinese President Xi Jinping to ensure a "humane solution" in Hong Kong. He warned that any "bad" outcome could hurt trade talks ahead of negotiations in Washington on Thursday.

Hardening her government's stance on the protests last week, Lam invoked a colonial-era emergency law to criminalize the wearing of masks at rallies but it fueled more anger, with continuous daily violence over the long holiday weekend. Police officers last week fired gunshots while under attack from protesters, wounding two teenagers who were the first victims of police gunfire since the protests started.

Enforcement of the mask ban began Saturday, and Lam said it was too early to call it a failure. Two people have been charged with violating the mask ban so far, which is punishable by up to a year in jail and a fine upon conviction.

Critics fear the emergency law, which gives Lam broad powers to implement any measures she deems necessary, could pave the way for more draconian moves. Lam said the government would make "careful assessment" before imposing other measures under the law, such as internet controls.

She also pledged to continue dialogue and take steps to address livelihood and economic problems in a policy address due October 16 when the Legislative Council resumes.

Protesters stormed and damaged the legislative building on July 1, requiring repairs. Lam appealed for peace when the legislative session reopens, warning that further disruptions would set back the approval of bills and impede the city's development.

The city's subway and trains, that carry some 5 million passengers daily, mostly reopened Tuesday but will shut early amid fear of more protests. The entire MTR network was shut down Saturday, with limited services in the last two days.

Video footages on local media showed masked protesters smashing windows of a train heading to mainland China late Monday as passengers screamed — the first time a train carriage was attacked. Protesters also threw objects on the rail track as the train pulled away. An MTR spokesman, who identified himself only as Terry, confirmed the incident and said some cross-border services have been suspended Tuesday.

Scores of students wore masks in defiance as they returned to school. Some rallied at lunchtime, chanting slogans and holding placards that read "You may take away my mask but not my belief" and "Ideas are bullet-proof." (AP)