Bzzzzz: What Carlos Celdran tweeted. Duterte might not prefer a Marcos win 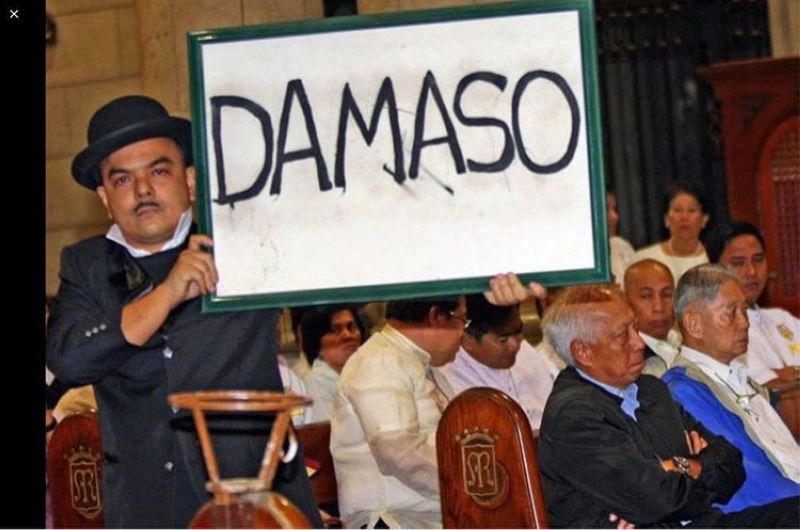 REMEMBER "cultural activist and performance artist" Carlos Celdran who had been found guilty, all the way to the Supreme Court, of offending religious feelings and meted the penalty of from two months and 21 days up to one year and one month and 11 days in jail? His wife Tessa announced Tuesday (October 8) that he died of natural causes. He was 46.

Celdran disrupted a religious ceremony at the Manila Cathedral last September 30, 2010, dressed as Jose Rizal and holding aloft a sign that read "Damaso." Celdran moved to Madrid, Spain in January 2019, five months after the SC upheld the Court of Appeals decision on his conviction of the crime of blasphemy.

Celdran's Facebook post, his last before he died, was at 4:48 a.m. Monday (October 7): "Twitter removed my post sharing this article (about Duterte talking about his new ailment) and sharing my feelings about it. Sharing it again. Will rephrase my sympathies. Don't get well soon."

Celdran didn't mention the original words that prompted the removal of his tweet. It must have been worse than saying, "Don't get well soon."

It deferred the vote the other Tuesday, October 1, then on Tuesday (October 8), deferred it again until October 15.

One of two things could happen when the vote would finally be taken:

[1] It would throw out the protest on the basis of Associate Justice Benjamin Caguioa's report on the recount of ballots from three pilot provinces (Camarines Sur, Iloilo and Negros Oriental), meaning Marcos didn't have enough "recovery votes" for the review of ballots from other areas to proceed, per PET's Rule #65.

[2] It would continue with the recount of ballots from the rest of the provinces covered by the protest, meaning it would set aside Rule #65 to give Marcos more and longer chance. It might also rule on Bongbong's third cause of action, the declaration of nullity of the votes in three other specified areas.

Whatever, the ruling would not decide on Robredo's eviction, not yet anyway. It could cut the rope or give a longer rope for Bongbong.

SPECULATION. Talks at bars and beer pubs include the speculation on which PET ruling on the Marcos-Robredo fight that President Duterte would prefer: a vote for or against Marcos?

Given the preference that Duterte had publicly expressed for the late martial law president's eldest child and only son, it would seem that it is Bongbong that he would like to win and take over the VP seat before the 2022 term expires.

Yet, the doubt persists, whom would Digong want to succeed him. He had also said a number of times that he'd prefer a president who could continue his programs and he thought his daughter Mayor Sara Duterte-Carpio could do it. There were also occasions when he said he didn't want Sara to go through what he has been "suffering" as chief executive. But who could protect better his legacy and his personal well-being after he steps down?

If Marcos would be installed as VP before the next presidential election, he would be "positioned" more strategically than any other contender for the highest public office of the land.

That event, some Malacanang watchers say, could also make Duterte "a sort of lame-duck," with Bongbong looming close and near and counting the months when he would soon be at the helm.