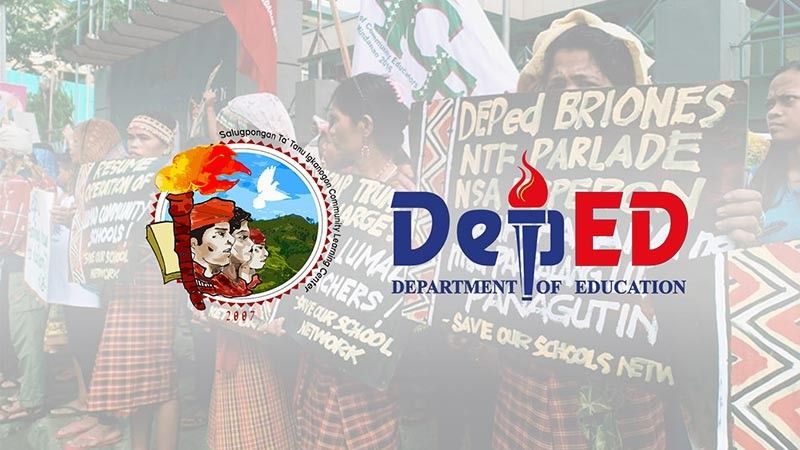 THE Department of Education (DepEd)-Davao bared the total closure of the Salugpongan Tatanu Igkanugon Community Learning Center Inc. (Salugpungan) and its affiliate schools on Tuesday, October 8, two months after the school was suspended.

The recommendation was based on the investigation of the five-man fact-finding committee created by DepEd, also requesting all student records to be turned over to the DepEd Schools Division Office for proper custody.

Based on the committee's findings, Salugpungan does not comply with the curriculum standards set by DepEd.

The committee also said that Salugpungan allegedly brought its students away from their home without the consent of their parents and used them to generate funds by making them perform the plight of the Lumad, which is violating DepEd's Child Protection Policy.

The committee also found out that Salugpungan failed to comply with the Free and Prior Informed Consent of the concerned indigenous peoples (IP) communities and Certification Precondition from the National Commission on Indigenous Peoples (NCIP), which is required before operating within ancestral domain areas.

Some Salugpungan students also do not have Learners Reference Number (LRN), violating DepEd's requirement under DepEd Order 26, series of 2015.

The DepEd-formed team also said the school has misrepresented its enrollment data in that the data contained in the documents it submitted do not match with the data found in the Learners Information System.

"This closure must be accepted literally as it is. Even applications are no longer accepted," Atillo said in a press conference at the DepEd regional office.

DepEd suspended all Salugpungan schools and its affiliates last July this year after reviewing the reports from National Security Adviser Secretary Hermogenes Esperon Jr. and the vice chair of the National Task Force to End Local Communist Armed Conflict that stated that Salugpungan has been using students in rallies and teaching them ideologies against the government.

Meanwhile, he said DepEd encouraged parents of affected Salugpungan students to send them to the nearest DepEd schools in their area.

"Ayaw mo kabalaka. Dawaton gihapon mo namo bisan pa naa na ta sa halos tunga sa atong school year. Daghan pamaagi ang DepEd para i-fill in tong mga panahon nga wala sila kaklase (Don't you worry. We will accept you even if they will be enrolling in the middle of the school year. DepEd has means to fill in those times that children were absent from school)," Atillo said.

Salugpungan, as of Tuesday, October 8, has not yet issued an official statement.