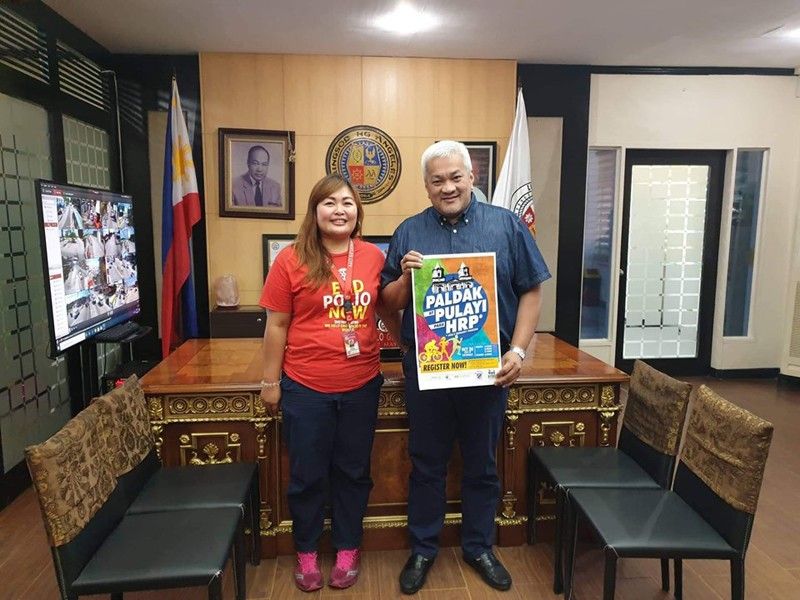 PAMPANGA. Angeles City Mayor Carmelo Lazatin Jr. vows to support the fund-raising activity for the restoration of the Holy Rosary Church, which was destroyed by a powerful earthquake last April. With the mayor is Saliro Bondoc, former president of the Rotary Club of Skytown, one of the sponsors of the running and cycling event dubbed "Paldak at Pulayi Para sa HRP." (Contributed photo)

ANGELES CITY -- Catholic leaders need some P100 million for the repair and restoration of the Holy Rosary Parish (HRP), which was destroyed during the 6.1-magnitude earthquake that struck Luzon Island in April 22, 2019.

Hilana Timbol Roman, an official of the HRP Pastoral Council, said they are targeting the budget, which includes the upgrading of the church's equipment, like the sound system, ventilation, and others.

She said it is even less expensive to build a totally new church but the HRP is considered a heritage church.

"We are boasting of having two markers already because the church has been declared as important cultural and historical property, and it has been established as the site of the first declaration of the Philippine independence," Roman said.

"We all agree that the church has to be restored and conserved," she added.

According to Roman, the Holy Rosary Parish is one of the four churches which remain closed.

"If you look at the church, medyo deceiving because you see it standing. Pero afer inspecting it, we realized that it sustained serious damages," the church official said.

Even before the earthquake, some of its material had been falling down, Roman added.

"Our parish priest said we should organize ourselves with regard to conserving and restoring of the church. So we met already with conservation architects and we have done test already," she said.

"What really happened is we had been overtaken by the event mika earthquake na so ngeni eya mu dapat ma restore nung ali corrective na mu rin (there was an earthquake so now it calls not only for restoration but corrective also)," she added.

During the earthquake, the church was separated into three parts and most of the damages were observed at the middle portion of the edifice, according to Roman.

One of the fund-raising is the running and cycling activity organized by AdCentral Consulting in cooperation with the pastoral council, Rotary Club (RC) of Angeles Downtown, RC Metro Angeles, RC Angeles North, Angeles Tourism Office, and others.

The event, which has three activities, includes a three-day Christmas bazaar that will start on October 25 to 27 that will coincide with the city's fiesta celebration.

"This is a city-wide event. We have the support of several Rotary Club of Angeles Downtown, RC Metro Angeles, RC Angeles North, Angeles Tourism Office, and others," Eufemio said.

Runners and riders may register at the Holy Rosary Parish or online through their Facebook page, Paldak at Pulayi Para HRP, Eufemio said.

"Rates of paldak is P500, ngeni pa pu kanu malyari ing paldak at pulayi within Angeles (this is the first time this will happen in Angeles). Starting point is in front of the church," she added.