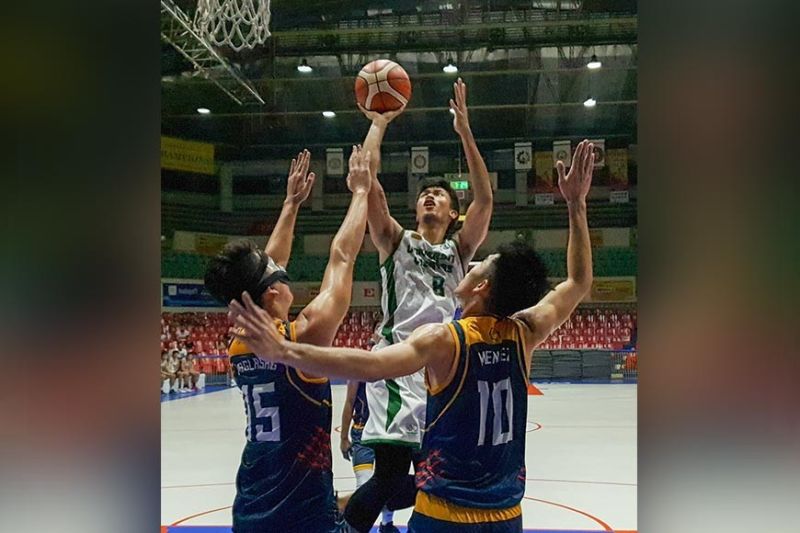 CEBU. Monic Soliva goes hard to the rack for two of his 10 points. (Arni Aclao)

THE three-time defending champions University of the Visayas (UV) Green Lancers opened their second round campaign with a resounding 90-80 win over the University of Southern Philippines Foundation (USPF) Panthers in the Cebu Schools Athletic Foundation Inc. (Cesafi) men’s basketball tournament at the Cebu Coliseum on Tuesday, October 8, 2019.

While the game was a lot-less physical than their previous encounter, the result was still the same as the Green Lancers leaned on their immense height advantage to pick up their sixth win in seven games.

Lass Coulibally played like a man amongst boys as he finished with 23 points, 15 rebounds, two assists and three swats.

UV’s local frontline also did a lot of damage as Melvin Butohan put up 13 points, Michael Maestre had 11 while Monic Soliva fired in 10 to offset the absence of two key players in guards Gileant Delator and Jiesel Tarrosa who were serving one-game suspensions after getting ejected in their last game.

The writing was on the wall as early as the first half as UV outhustled USPF, 48-32. They eventually extended it to 72-55 with just one more period left to play.

USPF got 30 points from the returning Sameen Swint. However, the Panthers’ bid for a Final Four seat took a massive hit as they fell to 3-5 after losing both their games in the second round. (JNP)