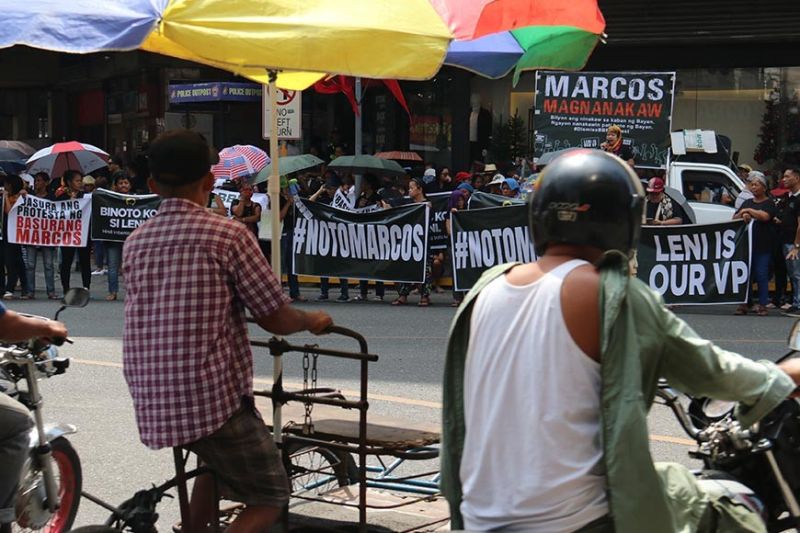 PROTEST OUTCOME. The Supreme Court (SC) was scheduled to vote Tuesday, Oct. 8, 2019, on the petition of losing vice presidential candidate Ferdinand Marcos Jr. to nullify the election of Vice President Leni Robredo in the May 2016 polls. But, late Tuesday afternoon, the SC, sitting as the Presidential Electoral Tribunal, reportedly deferred voting on Marcos’s petition. Cebu non-government organizations identified with the anti-Marcos movement air their wish that the SC would be independent and on the side of the people. (Photo by Amper Campaña)

AHEAD of a Supreme Court vote on the election protest of Ferdinand Marcos Jr., Cebu non-government groups made known their preference for Vice President Leni Robredo.

The Supreme Court (SC) was scheduled to vote Tuesday, Oct. 8, 2019, on the petition of losing vice presidential candidate Marcos to nullify the election of Robredo in the May 2016 polls. But, in late Tuesday afternoon, the Supreme Court, sitting as the Presidential Electoral Tribunal, reportedly deferred voting on Marcos’s petition.

Teody Navea, Cebu Citizens Assembly spokesperson, said they are ready to question the SC decision should it favor Marcos, the son of the former dictator Ferdinand Marcos.

“We’re worried of the outcome of the recount. We might be surprised of the decision. If it is against the will of the people, we will be indignant,” Navea said.

“We will not be very happy,” Navea said of a Marcos poll victory.

He said the group is calling for an independent SC that will be on the side of the people.

He also said the SC should note that its decision would “impact on the interest of the people.”

The Cebu Citizens Assembly is composed of various non-government groups who are part of the anti-Marcos movements, Navea said.

In the May 2016 elections, Robredo beat Marcos by a margin of 263,473 votes. Marcos then later asked the electoral tribunal to recount the votes in 36,465 clustered precincts covering 27 provinces in the country. (JJL)