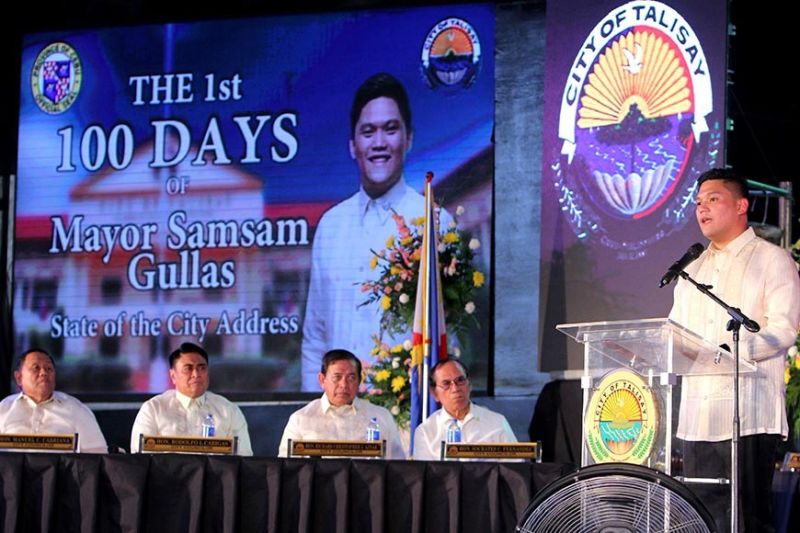 DEEDS. Talisay City Mayor Gerard Anthony Gullas Jr. (standing) delivers his accomplishment report in his first 100 days in office and his plans during his State of the City Address. (SunStar photo / Alex Badayos)

BECOMING the province’s “Tourism City” is how Mayor Gerard Anthony “Samsam” Gullas Jr. envisions the southern city under his leadership.

In his State of the City Address on Tuesday, Oct. 8, 2019, Gullas said Talisay needed a “brand” which could be a source of pride for its people.

For the neophyte mayor, having Talisay as the last destination of the Provincial Government’s Suroy-Suroy Sugbo southern trail next month would be a good opportunity to showcase what they’ve got.

“People tend to forget that Talisay is a very big piece of the puzzle in Cebuano history. Just like Leyte, which has a world-renowned statue of the landing (MacArthur Landing Memorial National Park), we have that in Talisay too... the landing in 1945, which is a big piece of history in Cebu. We have to market this,” he said.

After delivering his report on his first 100 days as mayor, Gullas said he will lead the inauguration and groundbreaking ceremony for the proposed tourist haven in Barangay Poblacion.

The project will cost around P100 million and will be built in three phases. It will be composed of a central plaza, a food court and a boardwalk leading to the Liberation Park.

The Provincial Government and the mayor’s grandfather and predecessor, Rep. Eduardo Gullas (Cebu, first district), have pledged P12 million to help finance the project. Other funding sources will come from the City’s supplemental budget for 2012 and its annual budget for 2020.

“The plan is for Talisay to be a tourism destination for families. This will include agrotourism in our mountainside and ecotourism in both coastal and mountain (areas). ... Whatever age, we have a site for you,” Gullas said.

Aside from tourism projects, Gullas said the City Government is also working on training responders who will be part of Talisay’s 35 disaster teams.

At least P20 million was allocated to upgrade security cameras around the city.

For education, the City Government recently launched the Cream of the Crop Scholarship Program for poor but deserving Grade 12 students from national high schools in the city.

Instead of building one big library, Gullas said his administration will add more Aksyon Agad Learning Centers in barangays to make research and studying easier for students.

The mayor said each of the city’s 22 barangays will also receive P1 million from the City to finance its priority projects.

For agriculture, Gullas has tasked the City Agriculture Office to act as “middleman” for farmers and buyers to make farming more sustainable.

Fisherfolk, on the other hand, will be introduced to island hopping and diving as an alternative form of livelihood.

Talisaynons are also encouraged to participate in the Basura Mo, Panginabuhian Ko program, which gives participants packs of rice or school supplies in exchange for trash collected.

For sports and wellness, Gullas wants to accredit Talisaynon athletes to have representation in the national and international sports arena.

He also plans to build a local sports center with an oval, soccer field and swimming pool inside the Talisay City Central School.

A badminton court will also be built inside the City Hall compound. (RTF)