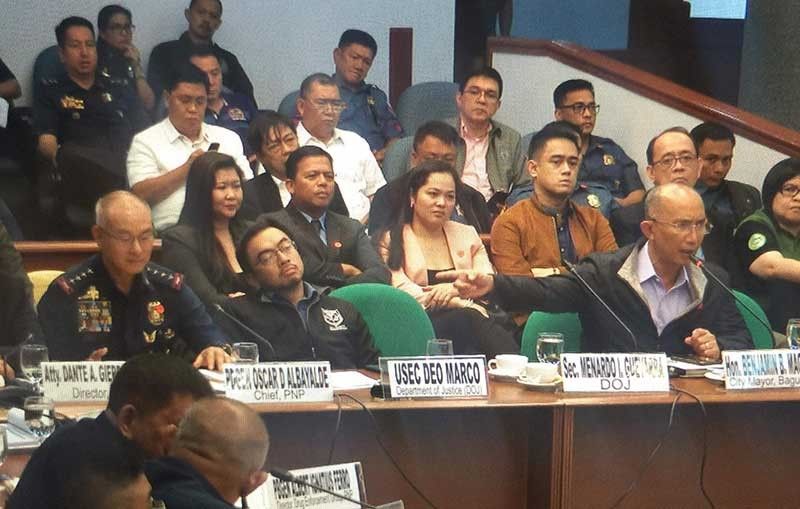 MANILA. Baguio City Mayor Benjamin Magalong points at PNP Chief Oscar Albayalde as he calls him out for allegedly lying at the resumption of the Senate investigation on ninja cops on October 9, 2019. (Contributed Photo)

(He told me, I don't know if jokingly, but he said, 'Actually Sir I received only a small amount from that.)

Lacadin made the revelation at the resumption of the Senate investigation on recycling of illegal drugs and ninja cops.

He said he was investigating the anti-illegal drugs operation conducted by Pampanga narcotics policemen in November 2013 when he received a phone call from Albayalde, who was the police chief of Pampanga when the operation was conducted.

Lacadin said he and Albayalde are good friends and former business partners.

Albayalde, who was also in the Senate, vehemently denied Lacadin’s claim.

He said he should have been charged had the investigators found him to be directly involved in the operation.

“I don't know anong conspiracy dito. It seems that everybody is ganging up on me. Kung sinasabi nya yan sabihin ko uli. Why was I not charged? Why (is it that) after six years, you will now remember everything? Why did it not come out during the conduct of the investigation? It's like I'm being crucified already,” said Albayalde.

“If he has personal gripes on me, I remember hindi naman siya ang regional director ng CIDG no'n eh. I don’t know at that time, your honor,” he added.

Lacadin denied having anything against Albayalde.

“Nagsalita din si General Lacadin na freely confidently he was saying na heto ang pag-uusap nila (ni Albayalde) again he is denying it, someone here is lying and I'm pretty sure it is not General Lacadin, it’s not General (Aaron) Aquino and it's not me or other officers but someone else. Siya po,” Magalong said, while pointing at Albayalde.

The Senate committee on justice and human rights is investigating the good conduct time allowance (GCTA) scheme but this has led to revelations on the illegal drugs activities of detained drug lords in collusion with some policemen and the recycling of seized illegal drugs by the so-called ninja cops.

They were then all members of the Anti-Illegal Drugs Special Operation Task Force of the Pampanga Police Provincial Office.

Based on the spot report prepared by Baloyo, who led the operation, the team claimed to have recovered more than 36 kilograms of illegal drugs and arrested a drug suspect identified as Ding Wenkun.

Magalong, however, found out in an investigation that about 200 kilograms of illegal drugs were seized and that a certain Johnson Lee, not Wenkun as reported, was arrested during the operation.

Albayalde was relieved as the Pampanga police director over command responsibility while the 13 cops were ordered dismissed.

The penalty was later downgraded to a demotion.

Magalong and Brigadier General Graciano Mijares of Personnel Holding and Accounting Unit (PHAU) said that aside from ordering the review which resulted in the recommendation of demotion of the said cops, Aquino did nothing about the case.

Mijares said Aquino ordered the return of the case to the legal department for another review.

Magalong revealed that Mijares told him that Aquino was confused on how to implement the order.

“I confirm this, sir, that the RD is in a quandary (on who to follow),” Mijares said confirming Magalong’s statement.

But Aquino denied having been in a quandary.

In 2017, then PRO-3 director Amador Corpuz, who was Albayalde’s classmate, signed the order downgrading the penalty against the 13 cops to demotion. (SunStar Philippines)