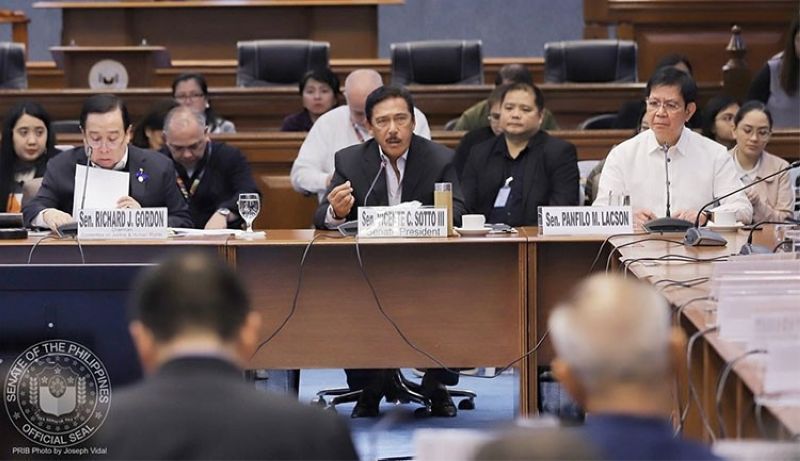 MANILA. Senate hearing on the GCTA controversy. (Photo from Senate of the Philippines Facebook page)

WHAT'S this publicized "wellness study" that says Cebuanos "drink and smoke more but have less sex"?

A CDN Digital story posted Wednesday (October 9) attributes the information to the "Second Philcare Wellness Index." It is said to be a nationwide survey of 1,350 respondents, with 300 from the Visayas and 75 from Cebu. The period of the study was not specified.

Those who have figures that refute the Philcare study may come out and tell the public the 75 respondents from Cebu were fibbing or didn't represent the local populace.

Footnote on PhilCare: It was established in 1982 and is "one of the pioneers in the health maintenance organization (HMO) industry." It believes that "health is not just a quick response to illnesses but a state of over-all wellness."

P.S. on health of Filipinos per its 2019 wellness study: "somewhat good."

[1] The "floating" status of police charged with wrongful conduct: Either the cop is suspended, demoted or dismissed, Senator Richard Gordon said, "but floating?" Government money is wasted, he said.

[2] Placing under surveillance police who are suspended or otherwise administratively sanctioned: Why should police resources be spent on wayward cops, Gordon asked.

[3] Why Napolcom drops charges against erring cops: It has no choice when there's no evidence in the police officers' folders. Some people are removing the evidence to clear the cops, Sen. Franklin Drilon said.

Those are comments of senators, which are not confirmed by the witnesses -- resource persons summoned or invited by the Senate committee. The police seem to get more information from the senators than what the senators learn from the police.

The witnesses are afraid to contradict the senators. Thus the facts are not sorted out.

[1] WATER CRISIS A 'DISASTER.' A water service interruption scheduled by MCWD Friday, October 11, is called by Facebook user Nagiel B. Banacia as a "disaster."

About a million people, he says, will be affected on a work- and-school day. "Expect the worst secondary disaster," he says, "especially fire." Banacia asks about MCWD's contingency plan and Veco's business continuity plan.

[2] OFFICIAL CAR. If a Cebu City councilor, department head or any other official is issued an official vehicle from City Hall, he can get only the representation allowance of P9,000 but not the transportation allowance of another P9,000. But, FB user Rene U. Borromeo says, a public official could've a car issued not to him but to his office and thus would manage to get both rep and transpo allowances or a total of P18,000 plus the use of the vehicle. Is that true? Why is this allowed?