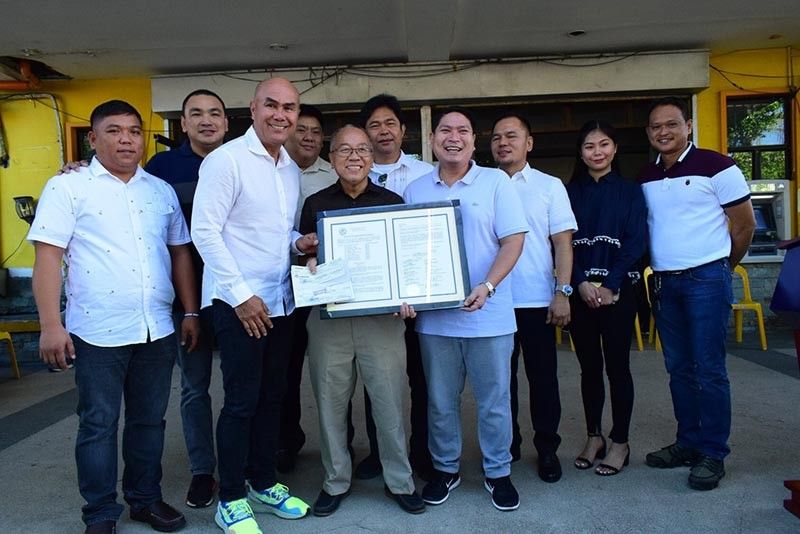 PAMPANGA. Mabalacat City Mayor Crisostomo Garbo and Vice Mayor Geld Aquino, along with members of the City Council, confer an award to Alex Castro, an advocate of culture and heritage, for the "Bayung Mabalacat" song. (Contributed photo)

THE Mabalacat City Government awarded a local songwriter for his composition that highlighted the preservation of the city's rich culture and heritage.

Mayor Crisostomo Garbo conferred a plaque of appreciation to Alex Castro, a Mabalaqueño, for his song "Bayung Mabalacat."

"We are really thankful for [Castro] for creating this song. It reflects how Mabalaqueños themselves can help usher in true reforms in our city," Garbo said.

Castro's composition is an anthem-like piece that heralds the transformation of Mabalacat, highlighting the reforms and progress seen in the city.

The song's intellectual ownership has been transferred to the City Government and it will be played during official activities in the city.

The conferment was based on a resolution passed by the Mabalacat City Council headed by Vice Mayor Geld Aquino that commends Castro for "conceiving, co-creating and producing the soulful song."

According to Castro, the song is the reflection of what people have been thinking, seeing, and talking about since Garbo's leadership emerged.

"From [local people's] stories came the theme and words of the song," Castro said.

Castro, a native of Mabalacat, is an author, writer, and historian. For years, he worked as a creative director and an advertising executive. Castro is also known for his blog site and book entitled, "Views From The Pampang."

Castro has recently led his batchmates from Mabalacat Elementary School in launching a coloring book that contains the heritage houses and historical sites found in Mabalacat town that was founded in year 1712.