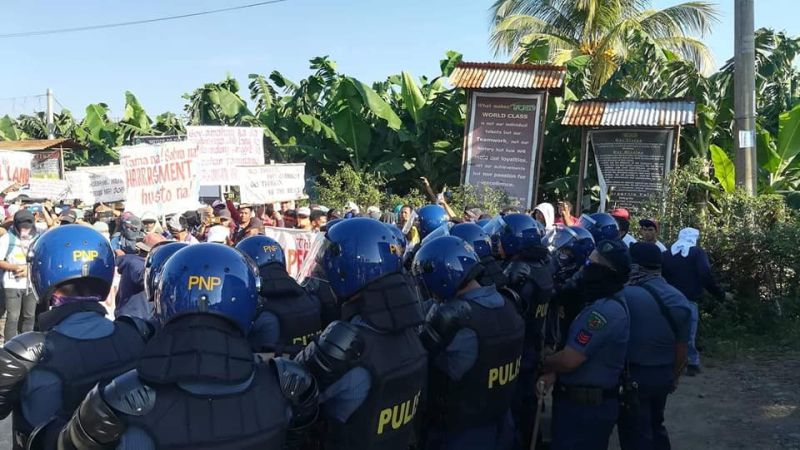 TENSION was high in Davao del Norte Wednesday, October 9, 2019, as the Provincial Government of Davao del Norte attempted to dismantle bio-security facilities put up by the the Tagum Agricultural Development Company Inc. (Tadeco) on the government road leading to its banana plantation.

Police in full riot gear faced off with Tadeco plantation workers who were carrying placards in a bid to stop the road clearing operation at the Tanglaw front gate of Tadeco, according to a Facebook post by Belove Conejar which was shared in the Tadeco Ko Bai page.

Tension was diffused after a local court issued a temporary restraining order (TRO) stopping the Provincial Government from clearing the road.

But even before the TRO was issued, Mindanao Development Authority (MinDA) Chairperson Emmanuel Piñol said in a Facebook post that Davao del Norte Governor Edwin Jubahib had relented and heeded the request of President Rodrigo Duterte to settle the conflict amicably.

Piñol said the provincial equipment that were sent to the area to demolish the bio-security facilities have been withdrawn.

The conflict erupted when the Provincial Government sent personnel and equipment, such as backhoe, to demolish the bio-security facilities put up by Tadeco on a government road in Tanglaw, Braulio E. Dujali, Davao del Norte.

Tadeco, one of the biggest banana exporters in the country, has set up tire dips and foot baths along the road to prevent the entry of Fusarium wilt or Panama disease, a soil-borne disease that could wipe out entire banana plantations.

Conejar’s Facebook post said police personnel were at the Tanglaw front gate of Tadeco Wednesday morning, October 9, to help in the clearing operations.

Around 10 a.m., Conejar posted a photo showing that those tasked to dismantle the structures have brought a backhoe.

Around 11 a.m., Conejar posted photos showing that the Tanglaw backdoor gate of the Tadeco plantation has been dismantled. Conejar said the gate, like any other gates in the plantation, has a tire dip and footbath for Fusarium wilt control.

Governor Jubahib, in a statement, said he only ordered the road clearing operations to address complaints from residents that they have been allegedly barred from entering the public road.

"Kini siya akoang interest ani sa pag-abri para mahatagan ug maayong paglakaw, pagbiyahe ang atong mga kaigsoonan dili mag antos nga mutuyok pag layo ug mubiyahe (My interest here is to only open the road to make travel easier for those living in the area and that they do not have to travel far)," he said.

The road traversing the Tadeco-owned banana plantation has been closed since 2015 after Tadeco put up bio-security gates as stipulated in its joint venture agreement with the Bureau of Corrections (BuCor), which owns the property.

On the Tadeco ko Bai Facebook page, comments showed that the road was never closed and the residents passing the area are instead urged to go through the bio-security measures.

Jubahib said, however, that a site inspection revealed that the road was closed to the public.

(Commuters used to only pay P10 to ride a motorcycle but now they have to pay P100. A mother who sends two children to school has to spend P200 going there and another P200 going home.)

The Provincial Government was supposed to enforce the demolition on October 7 but Jubahib suspended it to avoid violence since several workers of Tadeco tried to stop them in their first attempt.

(I do not know why Tadeco and BuCor won't allow access to the road. Based on our records, it is clear that the road, which was constructed during the time of governor [Gregorio] Dujali, is a provincial road.)

MinDA said Tadeco is one of the country's largest banana exporters, managing about 6,000 hectares of banana plantation that yield 28 million to 30 million of bananas annually, which are all shipped abroad.

Tadeco accounts for at least 11 percent of the country's total Cavendish banana exports, which reached 3.4 million metric tons in 2018.

Provido said the disease could be transmitted through footwear and vehicular tires. The bio-security facilities are part of the protocol set by the Bureau of Plant Industries (BPI).

"Fusarium, according to experts, is an aggressive virus which could pose a huge effect in the industry," Provido said.

As of 2015, DA-Davao said the disease has destroyed over 13,000 hectares of banana plantations in Davao del Norte.

Meanwhile, Floirendo called on the public to be one with them to protect the banana industry in Davao del Norte.

Tadeco has yet to release an official statement regarding the incident.