Nanay Sayong Arroyo up for sainthood 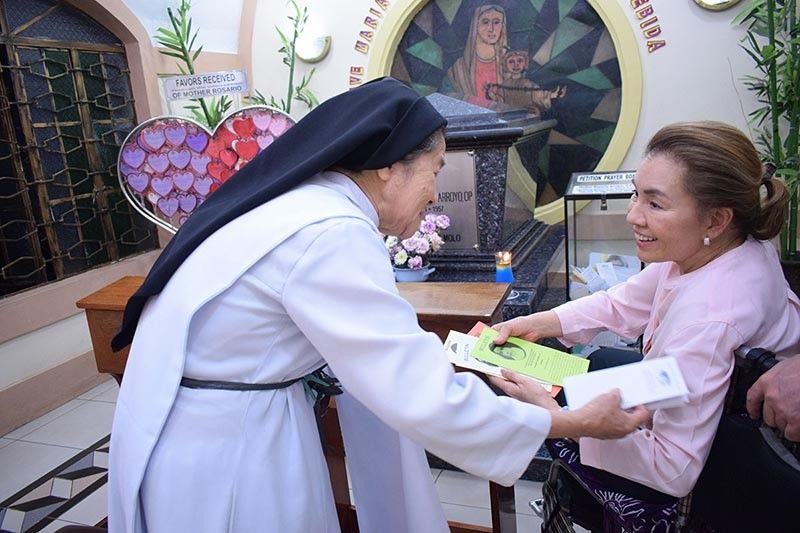 A nun welcomed Rep. Arroyo during her visit. 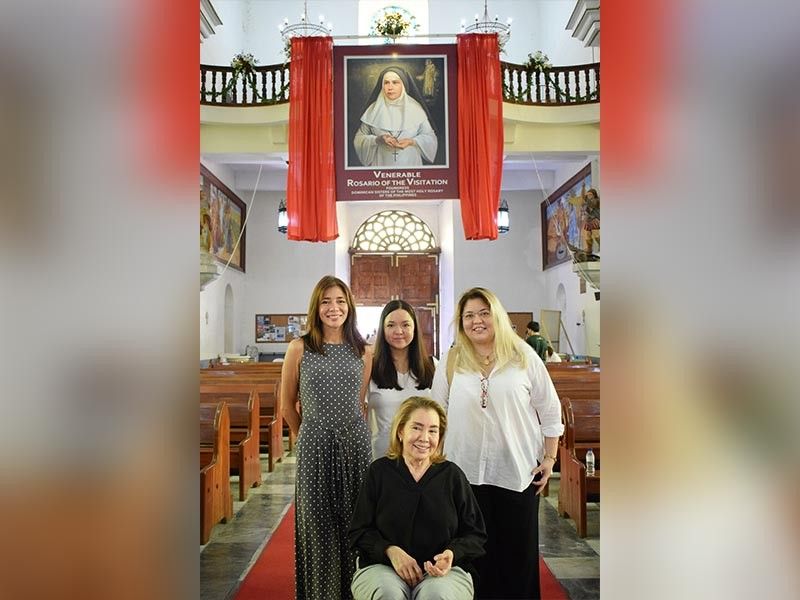 Negros Occidental 5th District Rep. Ma. Lourdes T. Arroyo, seated, and her daughters (L-R) Nadine Arroyo Jacinto, Luccia Arroyo Jacinto and Nicole Arroyo Jacinto offered a mass in honor of the Mother Maria Beatriz del Rosario was declared venerable by Pope Francis on June 11, 2019. Rep. Arroyo, being the grandniece of Mother Rosario visited her tomb and attended the mass on October 7, 2019 on the occasion of the feast day Our Lady of the Rosary. 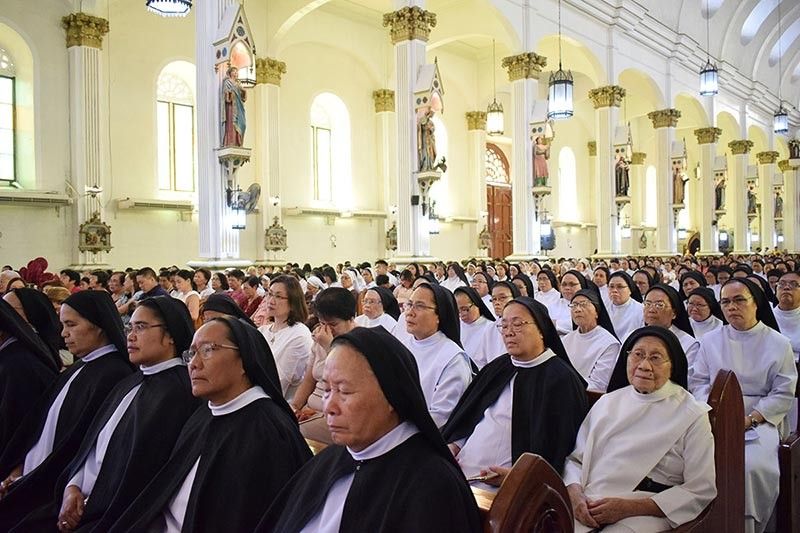 The Dominican sisters attending the mass at the Parish of Saint Anne in Molo, Iloilo. 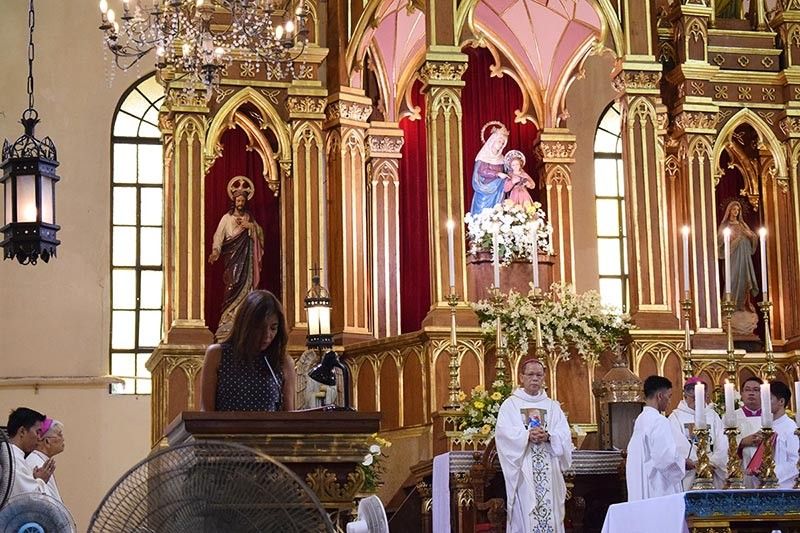 A mass was offered at Parish of Saint Anne in Molo, Iloilo. 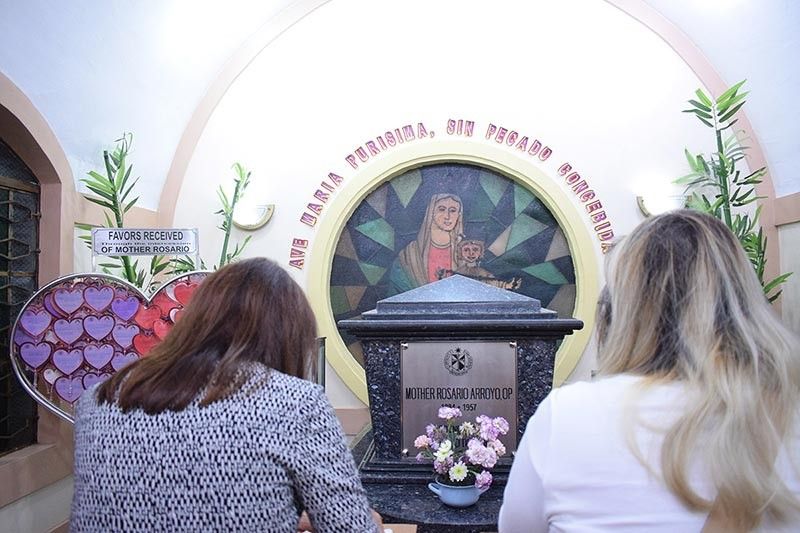 Paying homage to the crypt of Mother Rosario.

ILONGGO nun Mother Maria Beatriz del Rosario Arroyo is a few steps away from being a saint after Pope Francis granted her the title of “Venerable” on June 11, 2019.

A Thanksgiving Mass was held on October 7, 2019 as offered by the family on the occasion of the feast day of Our Lady of the Rosary.

Mother Rosario was the founder of the Congregation of Dominican Sisters of the Holy Rosary in the Philippines.

She was born on February 17, 1884 in Molo, Iloilo City and devoted her life to the service of the poor. She died on June 14, 1957 and entombed at Beaterio Del Santisimo Rosario De Molo.

The Vatican recognized Mother Rosario’s “heroic virtues,” and she has been described as simple and generous, who would give rice to the poor every Friday.

Mother Rosario is a relative of the Arroyos, including Negros Occidental 5th District Rep. Ma. Lourdes T. Arroyo who is her grandniece.

“I was nine years old when she joined our Creator in 1957. My father Ignacio used to ask me to dance to entertain Nanay Sayong in their house in Molo, Iloilo. I was happy to do so because she was delighted by my dancing,” Rep. Arroyo recalled.

Our family felt honored by her veneration and we all pray to God to lead her to sainthood, she said.

People who are sick especially those who suffer from cancer prayed to her for her intercession.

The two great devotions dear to the heart of Mother Rosario are the Holy Eucharist and the Holy Rosary.

Mother Rosario had in their family chapel, the Blessed Sacrament in which she and her family prayed the Holy Rosary.

Msgr. Manuel Duetao shared that the most visible charism of Mother Rosario as seen from the exemplary lives of the sisters running the Sacred Heart Academy are their motherliness, patience, and Christian love.

“I have learned that Mother Rosario’s life is being studied for beatification. I helped and have encouraged people to nurture her cause. When I was the chaplain of Saint Paul in hospital in Iloilo City, there was a young family with three children and the eldest has a congenital heart problem. The case was serious and needed an operation. But the family could hardly afford the cost of the operation, thus I told them to visit the tomb of Mother Rosario at the Dominican Sisters Motherhouse in Molo, Iloilo City. Three days after the visit, they attended a mass and they heartily approached me and told me that the child got an instant cure,” Msgr. Duetao said.

Sister Gemma Magnatico said, “Mother Rosario’s charism gave me a strong desire to become a Dominican Sister. I entered the convent on June 2, 1957, 12 days before Mother Rosario died. My love for teaching catechism was inspired by the charism of Mother Rosario.”

Sister Expectacion Alberto shared that,” Mother Rosario was very charitable as she helped the poor financially and spiritually.

She was compassionate to all including the animals by giving special treatment to sick animals being creatures of God.

Emma Ledesma, 59 of Leganes, Iloilo City suffered from 3rd stage colon cancer. She got operated. She felt abdominal pain two weeks after her operation. She was given a stampita of Mother Rosario with a relic and she put it on the painful area. Surprisingly, the pain was gone soon. With that, she frequently visits the tomb of Mother Rosario and feels something extraordinary every time she visits her.

Luzviminda Coronado of Zarraga, Iloilo shared that her mother had severe pneumonia and poor oxygenation. She was admitted for 43 days in the Intensive Care Unit because of her critical condition.

“We prayed to Mother Rosario’s intercession for healing. We pinned the Mother Rosario stampita on her hospital robe and her visitors prayed for her too. When she got healed, we owe the favor from Mother Rosario who sent her angels to watch over our mother during her crucial days,” she said.