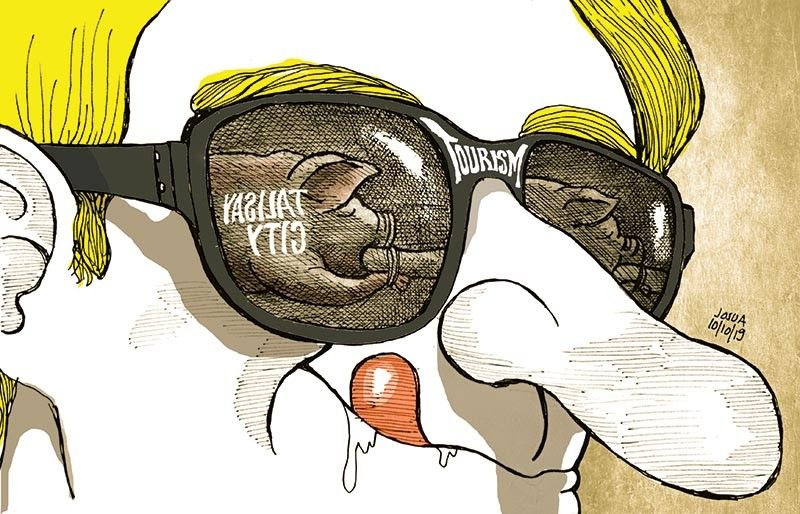 Talisay City Mayor Gerard Anthony “Samsam” Gullas Jr., in his State of the City Address this week, Oct. 8, 2019, said his city is a very big piece of the puzzle in Cebuano history. He said this in the light of the city’s rather inchoate tourism program if there is ever one to speak of. He wants better branding for the city.

But the branding that the mayor is thinking puts emphasis on the American landing in 1945 on Talisay shores. He said this should be highlighted the way the Province of Leyte heralds General Douglas MacArthur’s landing in aid of the MacArthur Landing Memorial National Park. Gullas Jr. thus earmarked P100 million for a “tourism haven” around the Liberation Park at the Poblacion.

Not quite highlighted in that speech, however, was the mayor’s push for the revival of the Talisay Lechon Festival, slated this month. We believe the city has created a committee, composed of the city’s department heads and barangay officials, to brainstorm on how best to promote the Talisay lechon, reputedly the best on this side of the planet.

“Whenever I hear people talk about Talisay, it’s expected that lechon would be part of the conversation,” he said over Facebook last June. He wants it known for people outside Cebu that the lechon roasted in Talisay is worth the trip.

However, there might be other ways to develop the cottage industry, and that is to stop looking at it as a “cottage industry.” As of last count, the city has over 40 lechoneros in its fold. The mayor recently met them over concerns of supply shortage after the pork importation ban imposed by the Provincial Government following the African swine flu outbreak in Luzon.

Last year, the city’s Talisay City Livestock and Poultry Center (TCLPC), formerly known as the Talisay City Slaughterhouse, successfully renewed its Double-A accreditation, which means it can prepare meat products, lechon included we suppose, that can be sold nationwide.

Years ago, the lechoneros prayed for a “fast lane” that will cater to the kind of demand the industry has. Government replied with a state-of-the-art slaughterhouse, now the only one of its kind in the whole Visayas. The TCLPC often processes an average of 150 hogs and 80 cows per day. Last year, it had the target of P20 million in revenues, and perhaps had easily earned it by year’s end.

Which brings us to our point. To truly support the lechon industry, Talisay City should think larger than the festival.

Much of what discourages some lechoneros in the city are the layers of bureaucracy and financial cost just to get the lechon through the roasters and into the market. At the end of the day, the industry is skewered to the core. It ends up jacking the stall price just to break even.

This is where the Talisay City Government can help. It can harness the TCLPC’s capabilities to help the industry, streamline bureaucracy, lessen fees, provide incentives, build convergent facilities for the lechoneros. This way, the city can brand Talisay lechon as not only the best-tasting in the planet, but the cheapest there is. As they say, you can always get it cheap right from the source.

The mayor wants to build a “food court” of sorts where lechon can be sold. He can certainly add a bit more imagination in improving the industry.