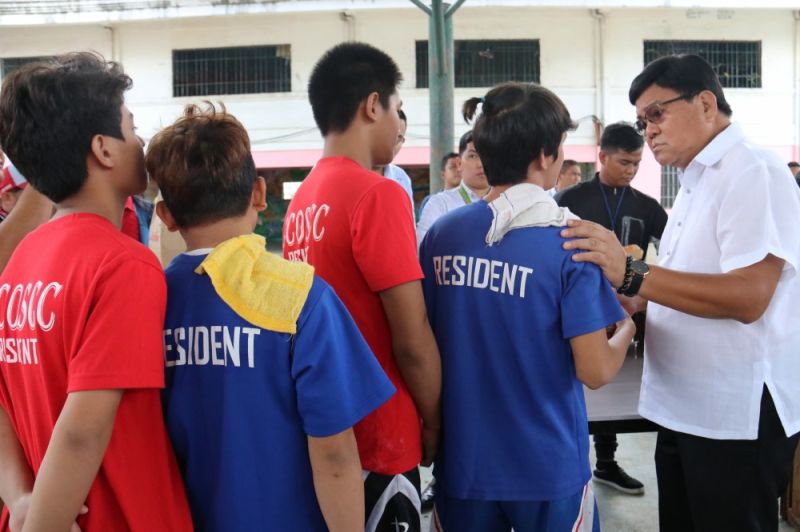 UNUSUAL VISITOR. Cebu City Mayor Edgardo Labella talks to residents of the Cebu City Operation Second Chance during his visit on Wednesday, Oct. 9, 2019. The mayor checked the facility in the wake of the escape of some 30 children. (Sunstar Photo / Amper Campaña)

THE management of the Cebu City Operation Second Chance (CCOSC) has 10 days or until Oct. 19, 2019, to get five of its residents who escaped on Oct. 4 to surrender.

Cebu City Mayor Edgardo Labella warned CCOSC head Ambrocio Ibones of the possible sanctions he would face if the children in conflict with the law (CICL) do not return in 10 days. He gave the deadline during his visit to the City’s facility for minor offenders on Wednesday, Oct. 9.

Labella, though, is not worried about what the five CICL could do, saying he doesn’t think they pose any threat to the community.

“Ako siyang gi-warning-an. Di lang ko mosulti (I warned him. I won’t say what it’s about) but there are sanctions that could be imposed. But I’ll give him a chance. Anyway they are not hardened criminals; they are not actually a danger to society,” the mayor said.

The five escapees who remain at large are facing drug charges, according to Ibones.

Ibones said he already talked to the parents of the five CICL who assured him of their help in locating the minors. He is optimistic that they would go back to the facility in the coming days.

Thirty CICL escaped from their quarters in the CCOSC on Oct. 4, but only 20 of them managed to make it past the facility’s main gate in Barangay Kalunasan.

Nine of them were captured outside the facility while six surrendered separately in the past days.

Two of those who surrendered claimed that some of the house parents and policemen assigned at the CCOSC maltreated them and hurt them physically on several occasions. This reportedly pushed them to escape.

But when Labella asked the residents if any of them had been maltreated, the CICL said they were never harmed inside the CCOSC.

Ibones suspects that his strict implementation of the house rules, including the ban on mobile phones, cigarettes and visit of the residents’ girlfriends, may have angered some of the CICL.

Also during his visit, Labella treated the 82 minors at the CCOSC to a chicken meal from a popular fast food chain, which they said they had missed eating. FROM PAC OF SUPERBALITA CEBU / LRC