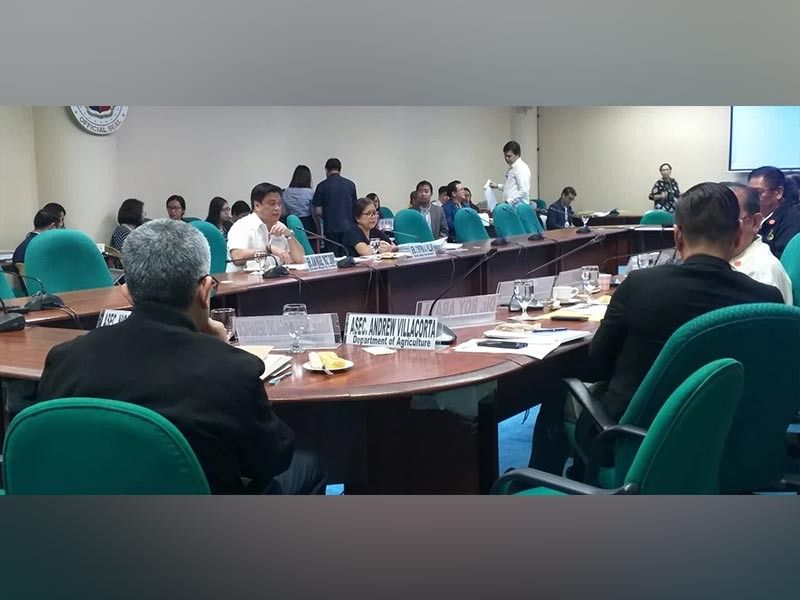 MANILA. Senate Majority Leader Juan Miguel Zubiri (left) presents before the top officials of the Department of Agriculture the current state of the sugar industry in the Philippines during the hearing of the agency’s proposed 2020 budget at the Senate in Pasay City Wednesday, October 9, 2019. Also in photo, Senate committee on agriculture and food chair Senator Cynthia Villar. (Photo by Erwin P. Nicavera)

PASAY CITY -- Negrense senator Juan Miguel Zubiri has appealed to the Department of Agriculture (DA) and Sugar Regulatory Administration (SRA) to come out strongly and break their “deafening silence” on the issue of the proposed sugar import liberalization.

Zubiri, during the DA’s budget hearing at the Senate here Wednesday, October 9, said there is a need for a strong voice to avert what happened to the rice industry where farmers on the ground are not getting something.

The Senate majority leader expressed worries that “if we do this to sugar, what will happen to five million people dependent to the industry.”

“I am here, to appeal to the DA to come out strongly together with the SRA and say no to sugar import liberalization as we do not need to liberalize,” he said, stressing that “we have enough (supply), if we don’t have then we will come up with a policy that will support the local industry.”

In his presentation on the current state of the country’s sugar industry, the senator underscored that the sugar industry has produced P120 billion in sales, P4.5 billion revenues from value added tax (VAT), P37 billion in excise taxes specifically for sugar-sweetened beverages, P6.9 billion in corporate income and real property taxes, P350 million worth of socio-economic benefits for industry workers, and about P20 billion of new investments in the past eight years.

The presentation also showed that the Philippine’s sugar industry remains less competitive compared to that of Thailand because of factors like low cost of fertilizers and other inputs, better irrigation systems, and easy loan access in the latter country, among others.

In response, Agriculture Secretary William Dar said that in the last two months of being the new secretary, they already had a number of meetings focusing on addressing concerns hounding the sugar industry.

The Sida law was not properly implemented and that they are trying to correct it now. That is already in the works today, Dar said.

“I have asked the SRA to make an action plan on how we can accelerate the utilization of what is allocated for SIDA,” he said, adding that SRA Administrator Hermenegildo Serafica and his team is now finalizing the said action plan.

On the liberalization of sugar importation, the DA chief said the agency will use the data and information presented by Zubiri to enhance the development of the sugar industry.

“We just had a meeting on Monday, we asked the management of SRA to come up with a position paper to outline what are the pros and cons so that we can deliberate this during the next Board meeting,” Dar added.

For his part, Serafica, who was also present at the hearing, told Zubiri that they would look into the issue