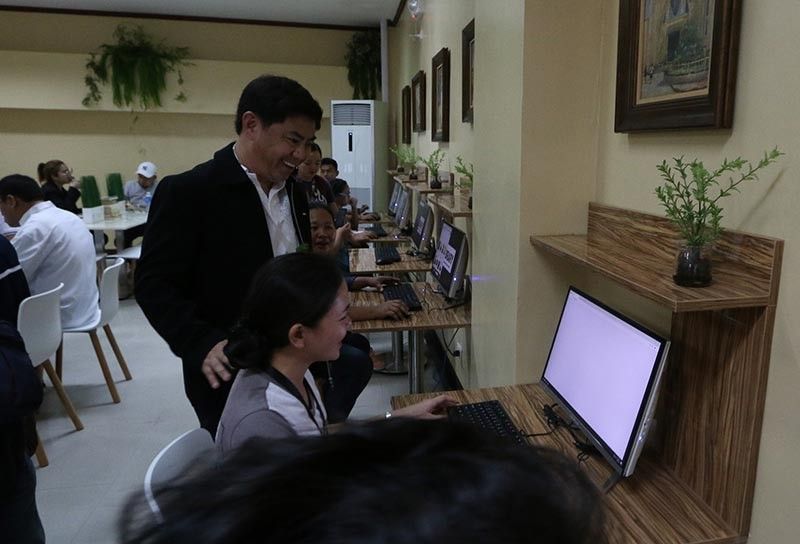 FREE USE. Lapu-Lapu City Mayor Junard Chan inspects the E-Library, which has 20 computer units and allows students to surf the Internet and print their work for free. (Sunstar Photo / Alan Tangcawan)

STUDENTS in Lapu-Lapu City who want a place to study or research are in for a treat.

The E-Library, which has 20 personal computers donated by Filipino-Chinese partners, offers free WiFi connection, computer use and even printing for students from the city.

Students can also bring their own laptops, tables or mobile phones in the lounge area of the E-Library, which is the first of its kind in Cebu Province.

However, to make sure the use of the facility won’t be abused, Mayor Chan is limiting the use of each student to two hours. They are also barring the use of social media sites, online games and the downloading of movies in the E-Library since they want it to be a place for study and research.

Chan assured that the facility will be safe as aside from being located in front of Police Station 3, it will have eight security guards.

Chan said he hopes the facility will give a chance to students who can’t afford their own PCs or to use the internet cafe a chance to do their research and other school assignments in a safe place for free.

An IT person and a person in charge of the E-Library will also be assigned to oversee the operation. (FVQ OF SUPERBALITA CEBU / ML)