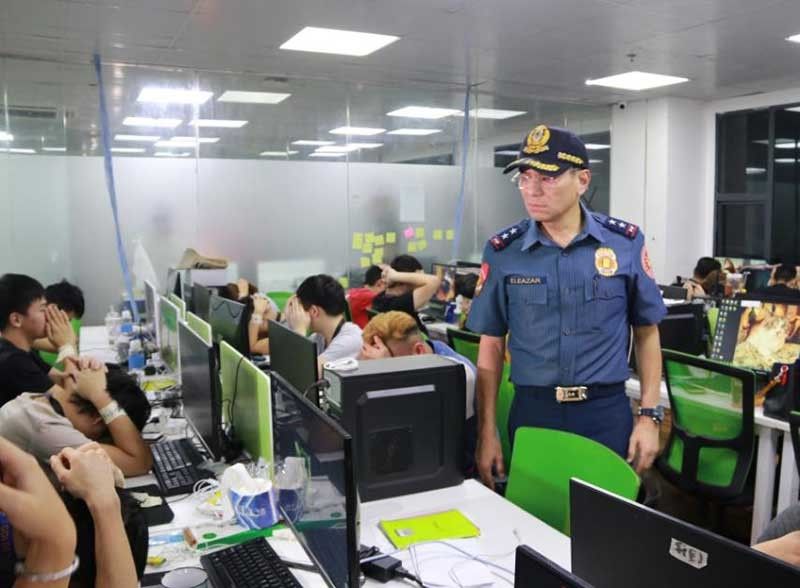 MANILA. National Capital Region Police Office Director Guillermo Eleazar takes part in a raid on a business process outsourcing (BPO) firm that led to the arrest of 542 illegal foreign workers, shown here with their hands clasped around their heads. (Photo from NCRPO)

POLICE and immigration authorities said they have arrested more than 500 illegally working foreigners, mostly Chinese, who are involved in telecommunications and investment scams, in one of the biggest such mass arrests this year.

Bureau of Immigration (BI) Commissioner Jaime Morente said those arrested did not have work permits and were involved in defrauding victims mostly in China by blackmailing or tricking them into sending out money.

Eleazar and Fortunato Manahan, Jr., chief of the BI Intelligence Division, likened their scheme to "budol-budol", which entices the victim to shell out cash or jewelry in anticipation of high returns.

The suspects were being interrogated at the NCRPO multi-purpose center in Taguig City because of their large number.

The operation was conducted jointly by operatives from the intelligence operations of the Bureau of Immgiration (BI), the NCRPO's Regional Special Operations Unit (RSOU) and the Armed Forces of the Philippines in coordination with the Chinese Embassy.

Eleazar commended the collaboration among various law enforcement agencies which resulted in crime prevention and solution.

“The Chinese authorities through the police attache ng China nag-coordinate sa atin sa BI in particular this is based on their findings and investigation na merong isang company involved in telecom fraud in China and they were victimizing a lot of Chinese, after tracing the whereabouts and the location of this establishment they've asked the assistance coming from BI and then eventually from NCRPO and nagsagawa ng tayo ng operation,” he said.

“The operation is a statement of a symbiotic relationship among Philippine law enforcement agencies and our foreign counterparts which is indispensable to ensure that the rule of law prevails in all circumstances,” he added.

Morente, for his part, clarified the role of the BI in arresting illegal aliens working in the country.

“If the alien committed a criminal act, it is under the jurisdiction of the local authorities,” he said.

“But if we see that there is an immigration violation, we may charge for deportation separately. It is within our policy not to implement deportation unless local cases are cleared already. If the alien needs to serve time in our local jails then so be it, this is to ensure the full effect of justice,” he added.

Morente reiterated his warning to foreign nationals visiting the country to comply with local laws or face deportation.

Eleazar said they will continue close monitoring and coordinating with Chinese police attache due to the influx of Chinese workers in the Philippines who have been involved in crimes such as illegal drugs, abduction, extortion and prostitution.

She said that immigration authorities and other law enforcers "have been working triple hard on ridding the country of these illegal aliens."

Wednesday's arrests brought the number of arrested foreign workers to nearly 1,500, causing overcrowding at the Bureau of Immigration's detention center, which could only accommodate 140 detainees.

Immigration officials plan to relocate detainees to a larger detention center and have tried to improve conditions in the current jail.

Morente said those arrested faced deportation if they violated immigration laws but would have to be detained longer in the Philippines if they're convicted of crimes.

Last month, immigration authorities, backed by army troops, arrested 324 Chinese accused of involvement in illegal online gambling and other crimes in a raid on eight hotels and other establishments in western Palawan province. Many of the Chinese lacked work permits and passports, officials said. (With AP)