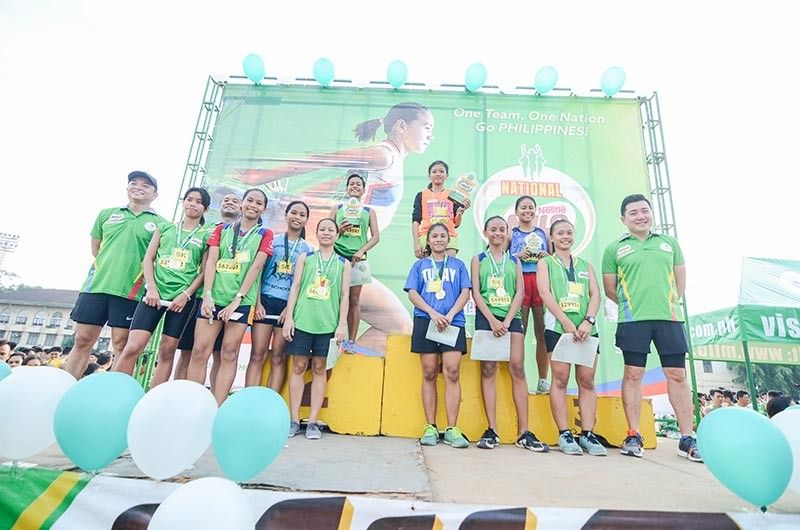 INSPIRA-TION. With the picture of her idol Mary Joy Tabal right behind her, 12-year-old Asia Abucay Paraase receives her trophy for winning in the women’s 5K division in the Milo Marathon Cebu leg. (Contributed Photo)

TWELVE-YEAR-OLD Asia Abucay Paraase crossed the finish line first among the participants of the 5K women’s division of the Milio Marathon Cebu Leg at the Cebu City Sports Center on Sept. 30, 2019.

But it was a different kind of finish line that her mother saw—the Olympics.

The seventh-grader from Pajo National High School won her first major title in just under a year of training, crossing the finish line in 19 minutes and 59 seconds.

Paraase is a second generation runner. Her mother, Sarah Mae, is a former runner and a gold medalist in the Central Visayas Regional Athletic Association (Cviraa).

But both mother and daughter are looking beyond school-based meets and they need not look far for an inspiration—Cebuana Olympian Mary Joy Tabal—whose face was featured prominently in the posters in the venue as the poster girl of the event.

The older Paraase also has a different perspective she can share to her daughter when it comes to Tabal. She saw how she started.

As a former varsity player, the older Paraase knows the challenges and the hardship an athlete goes through before a competition. It starts with the training, when only an athlete’s determination can help her.

“She was asking me to allow her to train many years ago. But it was only last year that I allowed her. I waited for the right time for her to be ready for the physical challenges of running. I then brought her to my former coach, Alex Loloy,” said Sarah Mae.

Sarah Mae wants her daughter to make a name for herself in running, reaching the national meets, Southeast Asian meets and even the Asian level.

“I want to see her continue what I haven’t done. I was a gold medalist in the Cviraa before, but I did not get to the Palarong Pambansa. The venue at the time was Lanao, and it was announced that some of the billeting centers were bombed and Region 7 decided to pull out,” she said.

Asia, the youngest of three siblings, was recruited by the Spectrum Runners Club after turning some heads with a series of wins in weekly fun runs. When she joined the team, she was challenged to achieve their target times.

That proved to be effective as her recent time in the Milo Marathon is her personal best. She also beat some of Cebu’s well-known and veteran contenders.

“Every time she sees established runners, she feels nervous. I tell her to just focus on your time. Running has always been about you and your time. I tell her that every strong athlete started from where you are right now,” said Sarah Mae.

Asia trains at the Mactan Airbase Camp every day and does long runs with her mother every Saturday and Sunday.

Sarah Mae wants her daughter to dream big, citing the case of Tabal. When she was still in college, Sarah Mae witnessed the start of Tabal, who was representing a public school—the Talamban Elementary School.

“I can say everything can be achieved with hard work and faith in God. Look at Mary Joy. She was not fast at the start of her career, but she was able to turn things around when she joined the Milo Marathon,” she ended.

For Spectrum president Gerry Mayo, Asia is a welcome addition to the running team. As a treat, he will bring Asia to Cebu Oceanarium, a newly opened 1.5-hectare ocean park.

“If she gets better and will continue to improve, she will get brand-new running shoes from me,” Mayo said.

Sarah Mae, who works at the Mactan Economic Zone, usually buys her daughter shoes at the “ukay-ukay” (thrift shop).

Nestle Philippines executive director Lester Castillo said before the run they chose Tabal as a poster girl for Milo Marathon since the pride of Cebu is not about just winning medals but is a role model in life.

For the young Asia, Tabal will serve as her compass as she tries to conquer the running world.