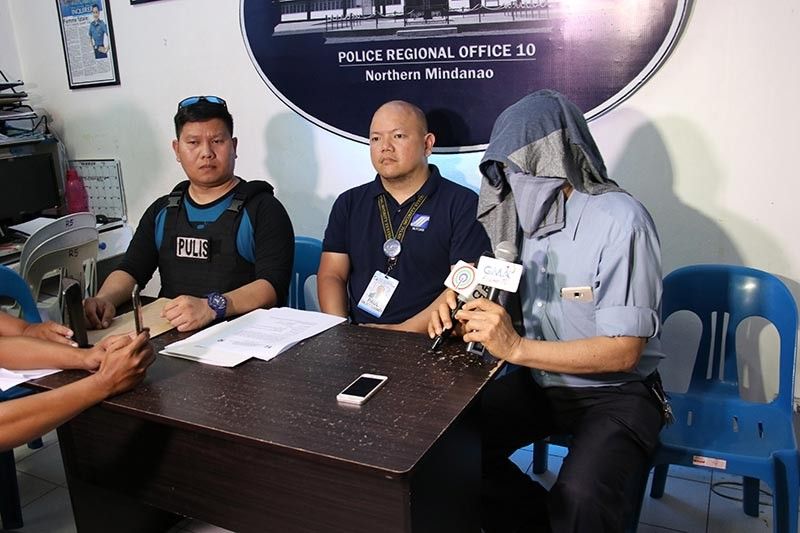 CAGAYAN DE ORO. Police arrested businessman Bienvenido Macaraeg Jr., for non-remittance of SSS contributions. In the photo, Macaraeg covers his face with a shirt while telling the media he was unable to pay because a fire engulfed his store, and accused his employees of stealing from him. (Photo courtesy of PRO-10)

FOLLOWING the arrest of a businessman on Wednesday, October 9, for non-remittance of his employees’ Social Security System’s (SSS) contribution, the SSS revealed that three employers are facing arrest while 100 more are under monitoring in Cagayan de Oro City.

The SSS said it is adopting a “Tokhang” (knock and plead) style in going after delinquent employers.

On Wednesday, police arrested businessman Bienvenido Macaraeg Jr., proprietor of Sunny Farm, for failing to pay SSS contributions of his employees since 2011.

According to SSS, 28 employees of the Sunny Farm complained to their office. Macaraeg’s total delinquency reaches P1,245,764 million.

His warrant was issued in 2016 but only served on Wednesday in an entrapment operation.

Macaraeg is facing charges for violation of SSS law.

The SSS said three more businessmen in the city have pending arrest warrants since 2011. The government-ran social insurance program has over P4 million collectibles from these three delinquent employers.

One of three employers is running an engineering solutions whose total delinquent account reached to P3,535,301 million.

Accordingly, he has been unable to pay some 89 employees of their SSS contribution from February 2012 to December 2014.

As of Thursday, the SSS said he is no longer living at his last known address in Barangay Tablon. He has a pending warrant of arrest since December 2015.

Another business owner of a learning institution also has a standing warrant. The business owner owes his employees P791,117 but his identity is withheld as authorities are still conducting follow-up operation. The warrant of arrest is issued only last June 3.

If a six-month gap of contributions is observed, Flaviano said they will issue a billing letter to the employer and give them 30 days to comply.

If the employer still fails to comply, the SSS legal office will issue a final demand letter.

They will then file a case in the court if the employer still has no action to address the violation.

Lawyer Ma. Barbara Raizza Juan, National Capital Region-West Legal Department, for her part, said it is the employers’ responsibility to comply with the SSS law.