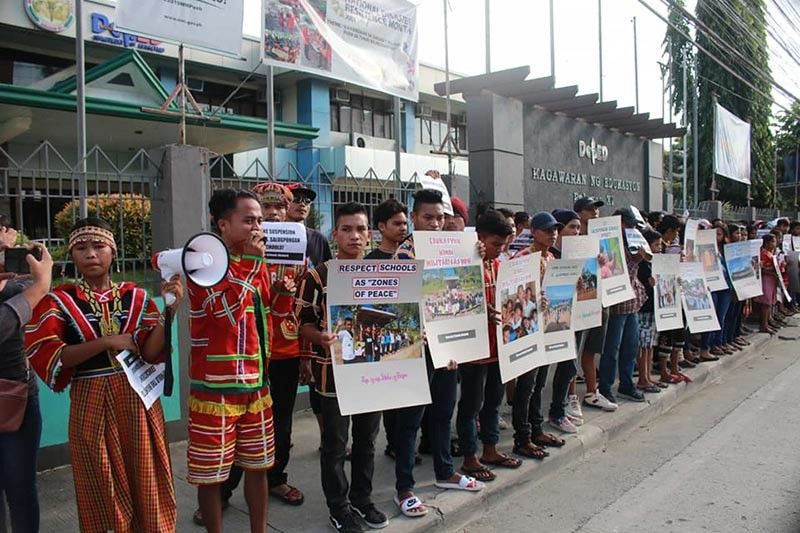 A NON-GOVERNMENT organization (NGO), advocating for children's right to education, slammed the Department of Education (DepEd) for not setting foot on any of the foreclosed Salugpongan Ta’ Tanu Igkanogon Community Learning Center, Inc. (Salugpongan) schools during the course of their investigation.

Save Our Schools (SOS) Network, in a statement on Wednesday, October 9, condemned DepEd's resolution closing all 54 Salugpungan schools in Davao region, calling the decision based on "malicious and false claims of the military".

"Contrary to what the DepEd is trying hard to portray, the order is baseless, partial and reeks with ill-motive. It is a clear betrayal of Lumad’s hope for education," SOS said in a statement.

The group said the fact-finding team DepEd commissioned failed to even visit one of the Salugpungan schools to check on the accusations.

"DepEd 11 may have formed a 'fact-finding team' to supposedly look into the allegations against Salugpungan schools, but it has really no intention to look at the merits of the arguments of the Salugpungan schools on the accusations hurled against them.

SOS said that while DepEd has only set foot on Nasilaban in Talaingod, they did not proceed to the schools.

"Basically, there’s no investigation that took place," the group said.

He also said they are questioning the investigation's results, saying that DepEd had been biased in the result by fully-citing the report of National Security Adviser Secretary Hermogenes Esperon Jr. as basis of their decision.

DepEd suspended all Salugpungan schools and its affiliates last July this year after reviewing the reports from Esperon and the vice chair of the National Task Force to End Local Communist Armed Conflict, claiming that Salugpungan has been using students in rallies and teaching them ideologies against the government.

However, DepEd announced the closure of all Salugpungan schools on Monday, October 7, after the fact-finding team deemed its closure through a resolution.

Datu Lumansad Sibugan, tribal chieftain of Barangay Sto. Niño, Talaingod, Davao del Norte, said they will no longer allow any non-government organization to penetrate in their community without the necessary permits.

Atillo said that even representatives from Salugpungan can attest to the agency's procedure during the fact-finding investigation.

"We even expanded the opportunity by creating the fact-finding committee to expound further the issue," he said in a phone interview.

He also said that the issue of Salugpungan is not about the physical condition of the school itself what's happening within the school and its administration.

"As for SOS, we would like to remind them that the issue at hand do not require physical presence of the investigator," Atillo said.

But Atillo said the education head visited the area to monitor the ongoing efforts of DepEd in putting up schools as replacement to the foreclosed Salugpungan schools.

In a previous report, Atillo said Salugpungan could still raise the issue to Briones in the national level.

"If they will be raising it to Secretary Briones, then a new fact-finding committee will be created," he said, adding the issued closure order is within the jurisdiction of Deped 11.

He also said that while the closure order is issued, all Salugpungan operations will no longer be allowed. He added all requested permits by the school will be automatically be rejected.