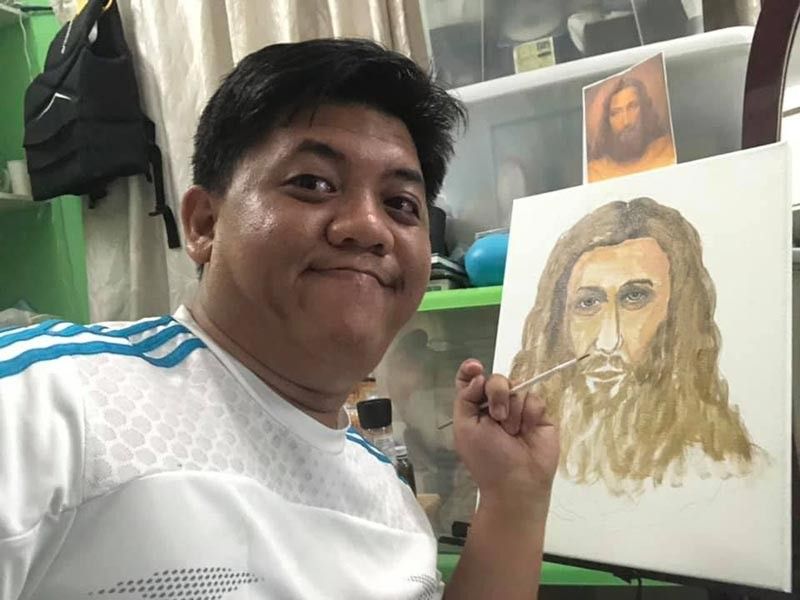 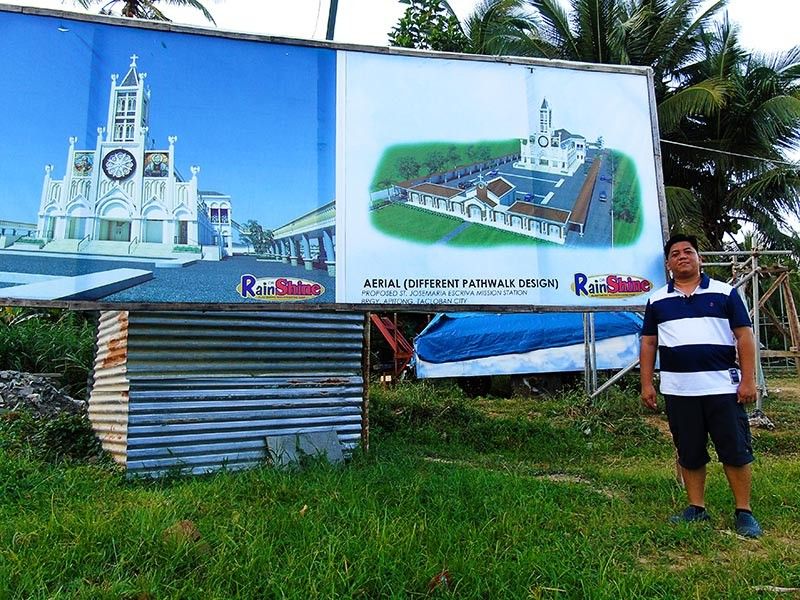 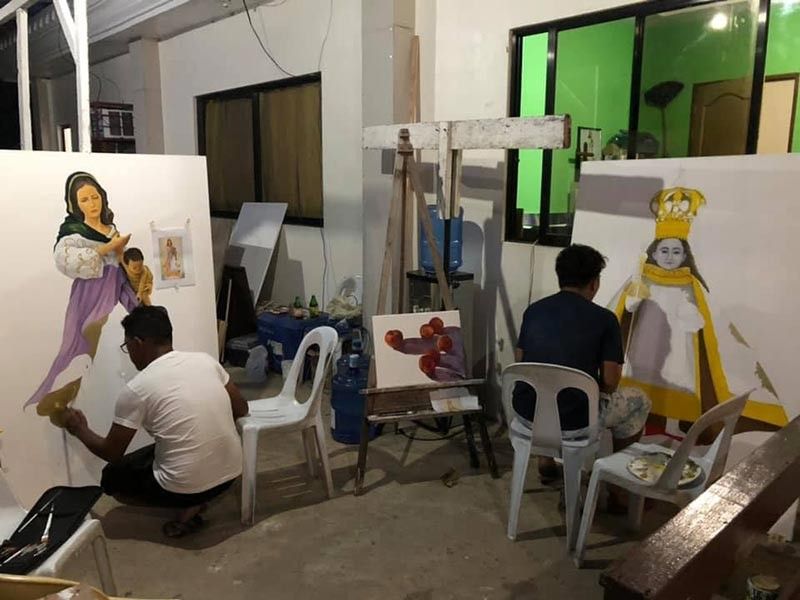 FROM portraits to religious vestments, Fr. Kim Margallo is doing everything he can sell to raise money for the construction of the first St. Josemaria Escriva Mission Station Church in Tacloban City.

"It's a tall order. I have to use my creativity to achieve what we need to achieve," says Margallo, the mission priest in-charge of the mission station church.

"My term is only for three years. But it's up to Palo Archbishop John Du if I will be extended. I gave myself a timeline. Hopefully, I can build the church," says the 35-year-old priest and artist.

The priest says that Du, a high ranking official of the Catholic Bishops' Conference of the Philippines (CBCP), approved the plan.

"Regardless if I could finish it or not within three years, I have to finish with the basic structure," he says, enthusiastically.

After one year in his new assignment, Margallo however saw some progress in the construction.

"The costly part is the detail, which is about 60 percent of the total amount," he says, matter-of-factly.

Once completed, the St. Josemaria Escriva Mission Station Church will feature a columbary and ossuary facility that will serve as a "dignified and cost-effective Catholic alternative to casket burial" not only in the city but also in Eastern Visayas region.

The facility will be located at the church's basement to house bone casket and cremated remains of the dead.

Following its original site development plan in one-hectare donated lot, the mission station church will be composed of several church edifices and structures "that will facilitate the services to be rendered by the church."

Its construction follows several phases. First is the filling up of floor elevation, followed by the construction of adoration chapel that serves as temporary church building, priest rectory, office, sacristy, and confessional room.

Phase three is construction of the main mission church building with its basement design to be a columbarium and ossuary.

The phase four involves the construction of the priest rectory, followed by the multi-purpose building, function hall, and evacuation.

The final phase is landscaping and beautification.

Last August 2018, Margallo launched the first pledging session through their fence program. They started the phase three, which is the construction of the main church, in December 2018.

"This will become a landmark shrine," says Margallo, adding that he is preparing the documentary papers so he can ask "first class relic" of St. Josemaria Escriva to be displaced at the mission station church.

Margallo says that people in the city and in the region have to go to Manila or Cebu to cremate the remains of their dead loved ones.

Margallo says that people can "transfer" the remains of those cremated in the upcoming facility.

"But looking for its funds is being passed to us now. We have to find ways," Margallo told SunStar Philippines in an interview.

He, however, reminds the public that the facility is not for sale.

"Donors can give particular amount then we give them a token. The same with painting, we put a certain amount as a donation. The worth of one painting is not its exact price. If we put about P15,000 to the price, that would be too cheap. So it's just a donation," he says.

Interested art buyers and dealers can also have pre-orders of their oil paintings.

Back to Catechetical church

"We can have one painting done in one day, if necessary," he says.

"We started the idea of painting because of the small space and the lack of budget," says the priest, referring to the finished chapel, which served as one of the initial features of the entire mission station church.

The two artists started to paint the wall and ceiling of the adoration chapel, which served as temporary church building, aside from doing commissioned paintings to support the church.

"This place now serves as Catechetical chapel. Anyone can come here to reflect, relax, and be at home. This is something which has been lost in the passing of time," Margallo says.

According to the priest, going inside the chapel "becomes a journey of faith" as church-goers will be greeted with various paintings depicting Bible stories.

"You can come here to meditate. The story of the entire story of salvation can be found inside the chapel. From the story of Adam and Eve, Crucifixion of Jesus Christ, the images of militant, suffering, and triumphant church, and finally the Heaven," says Margallo.

Pointing to the Eucharist in the middle of the chapel, Margallo says that the Catholic faithful has to go through it before they will have the salvation.

Also painted inside the chapel are some saints "whose lives church-goers can look up through."

Painted saints include St. Isidore the Farmer, the patron saint of the village; St. Josemaria Escriva; and St. Thomas More.

"St. Thomas More is the patron saint for politicians, statesmen, and big decision-makers. He is placed there because this church is also dedicated as adoration of St. Thomas More. This is the request of the owner of the lot. Politicians can have a place to pray here, too," Margallo says.

Another reason why the priest came up with lots of artworks in the chapel is to attract the young people to go to church.

"With our simple pictures, we invite the youth. It's become a journey of their faith. We evangelize to the millennials, and sometimes it is difficult to convince them to go to church to worship. They are more on visuals, thus we have it here inside the chapel," adds Margallo in a report from ucanews.com.

Margallo, who was also inspired on how the Vatican's Sistine Chapel was painted, said that with church artworks, people can revisit the origin of their faith.

"The early Christians did not know how to read. They were taught through paintings. Now, we are bringing it back. This will be the move of the church," says Margallo, who was former youth director for six years.

Margallo brought his resident artist Kardante from Ormoc City to Tacloban after working with him in various art installations and designs during his previous assignment in Ormoc.

He said that Kardante, 55, always wanted to work in the church after he left his former religion Iglesia ni Kristo.

"He asked me how he could help the mission station church. From there, we started to collaborate," Margallo says.

With only P1,000, Margallo bought some wood and had their hand-made canvas.

Kardante, who started painting movie billboards, says he doesn't have a collection of his paintings.

All his paintings are commissioned.

"He doesn't have enough space in his house where he can place his paintings. I told him he can paint in the chapel and eventually make it into a museum," Margallo says.

"He can paint even in 15 minutes," says the priest, adding that Kardante can do the paint strokes of prominent Filipino artists Fernando Amorsolo and Juan Luna.

Every time there is a mass, Kardante can be seen painting at the corner of the chapel.

Margallo then announced to the church-goers that they can purchase some paintings they like to help finance the building of the mission church.

"I stayed here in the mission station church because a miracle happened to me here," says the soft-spoken Kardante.

"One time, I prayed hard while painting St. Josemaria Escriva. I was having difficulty with my finances that time. The following days, someone ordered 10 paintings. It made me cry," Kardante says.

The columbarium and ossuary facility will be built inside the mission church "to provide Catholic faithful of Palo Archdiocese and their family members a final resting place, consecrated and conserved in a spirit of dignity and reverence for the loved ones at rest."

Columbarium is Latin for a "dwelling place of a dove," and Christians believe that dove is a symbol of Holy Spirit.

Urns are placed in these niches as a final resting place.

"Ossuary is a bone casket notably that of a person buried from a cemetery. The church is a walled structure vaults with an oratory facility. There are more than 2,000 niches located on the basement. The facility provides an attractive location for grieving, prayer and meditation," Margallo says.

According to the mission station church, burial within the church itself or the adjacent church yard was once a common practice.

Historically, Christians from the earliest time have buried their dead in the consecrated areas in close proximity to their place of worship where they could be remembered and their remains safeguarded.

In 1965, the Code of Canon Law of the Catholic Church was amended to allow for cremation as an alternative to casket burial for the final disposition of our beloved.

The mission church decided to provide such facility at the basement of the church building.

It said that choosing columbarium as opposed to cemetery is a personal choice.

"Many people choose to be buried in a columbarium and their church, because of a strong desire to be laid to rest on the grounds of a church that they loved and served. They like the simplicity of the liturgy and want to preserve a nearness to the church and perpetuate a relationship that has been a lifelong pursuit," it said.

Those who choose to be placed in a columbarium at the church often are attracted by its religious focus and the nearness to the church. The proximity makes it convenient for visits by loved ones and for period of meditation and reflection, it added.

The cost for being placed in one of the niches is usually less than the cost of interment in a cemetery.

Other factors that may influence the people's decision to choose inurnment in a columbarium are concerns about the environment and space available in a cemetery lot.

The ossuary is a depository for the bones of the dead.

"Usually there are remains of these departed who were once laid in a cemetery and is now transferred to a niche," said the mission station church in its statement.

To avail of the facility, a fixed donation is needed in a first-come basis.

A contract of donation and right of inurnment will be provided in the transaction.

"Those who have generously donated during our first pledging session are also recipients of single niche in the facility," it added.

Seeing the necessity to complete and sustain the project, Margallo says they are launching their major fundraising project.

"I prayed a lot for this huge project," the priest says. (SunStar Philippines)