Fistfight breaks out in Warriors vs Panthers match 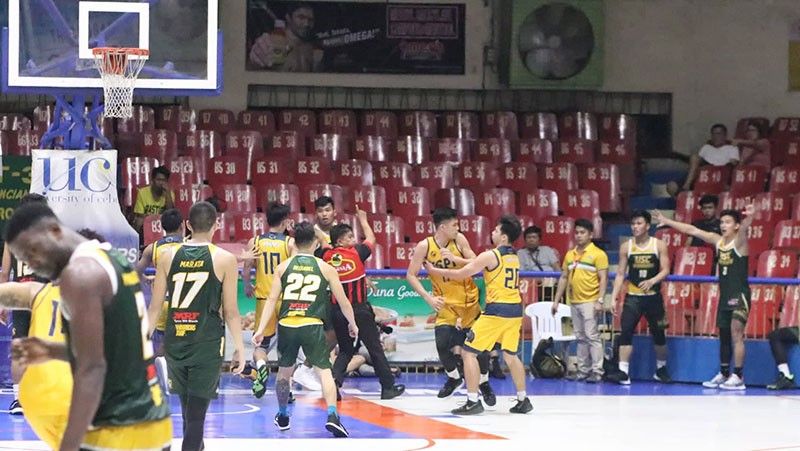 CEBU. USPF forward Steven Ursal tries to get away from the bench area of USC after he and Warriors forward Kenneth Brillo figured in a commotion. (Amper Campaña)

THE University of San Carlos (USC) Warriors prevailed in overtime over the University of Southern Philippines Foundation (USPF) Panthers, 76-72, in a game marred by a fistfight with just 2.5 seconds remaining in the 2019 Cebu Schools Athletic Foundation Inc. (Cesafi) men’s basketball tournament at the Cebu Coliseum, on Thursday, October 10, 2019.

With USC ahead, 76-71, with just two seconds remaining, USPF’s Steven Ursal and USC’s Kenneth Brillo got tangled up in a battle for the loose ball. Brillo was then seen throwing a trio of punches to Ursal as things nearly got out of hand.

The aftermath saw Brillo and Ursal get ejected as well as USC’s Froilan Mangubat who was seen entering the court during the commotion.

The fracas overshadowed Magic Marata’s heroics at the end of the fourth period. Down three with just seconds to go, the Warriors got the ball to Kurt Trangia who missed a triple.

Fortunately, Marata was at the right place at just the right time as he recovered the loose ball, planted his feet and shot in a three-pointer that found the bottom of the net to tie the game at 63-all as time expired to send the match to overtime.

Langres led USC with 29 points, 13 coming in the third when the Warriors made their comeback from 15 points down. Marata ended up with 17 markers to help the Warriors improve to 5-3 (win-loss).

USPF suffered their third loss in a row and fell to 3-6.