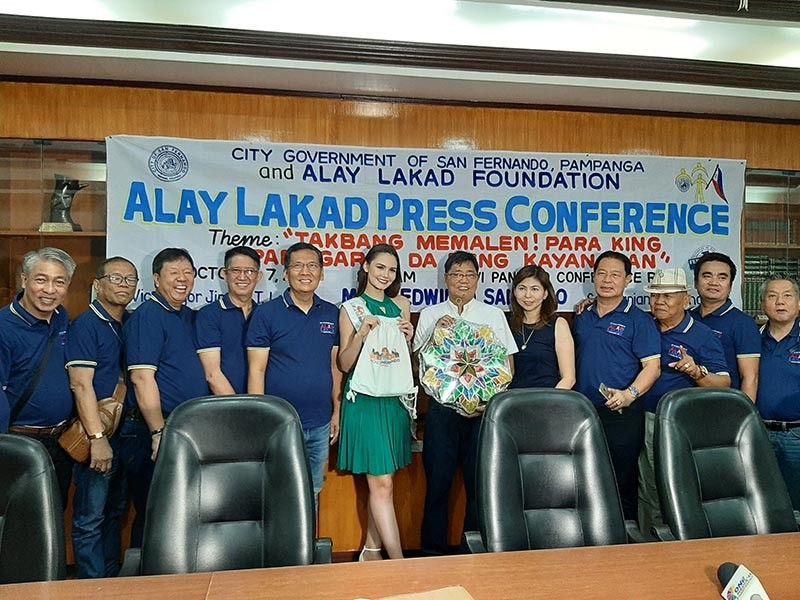 PAMPANGA. Miss Millennial Pampanga Angela Maria Robson gets tokens from Mayor Edwin Santiago during her recent courtesy call in the City of San Fernando. Joining them are officials of the Alay Lakad Foundation. (Princess Clea Arcellaz)

MISS Millennial Pampanga 2019 Angela Maria Robson recently made a quick visit in the City of San Fernando as part of her promotional duty for the competition, where she lauded the Alay Lakad Foundation for helping out-of-school youth get quality education.

Robson, who is also the reigning Mutya Ning Kapampangan, is now going around the province to feature some of the tourism destinations in the noontime show Eat Bulaga.

Robson, accompanied by City Tourism Officer Ching Pangilinan, paid a courtesy call to Mayor Edwin Santiago at the city hall during her visit.

Robson's visit also coincided with the press conference for the Alay Lakad 2019 wherein needy students are given assistance to finish their education.

In her short message, Robson lauded the City Government and Alay Lakad Foundation for their initiative to help send their scholars to school.

"What you are doing, sending my fellow youth to school, is nothing but heroic and I thank you from the bottom of my heart because you do it for a good cause," she said.

The 19-year-old lass, who was also crowned as Mutya Ning Angeles 2017, is from Barangay Malabanias in Angeles City.

She graduated with a degree in Bachelor of Science in Business Administration, major in Marketing Management at Angeles University Foundation. At the same time, Angela completed training on basic first aid and survival at the Red Cross and graduated as a commanding officer of the Reserve Officers' Training Corps in her university.

During the first round of competition, Robson bested other candidates from around the country in the online contest launched by Eat Bulaga.

In her recent appearance, she promoted the province as the Culinary and Christmas Capital of the Philippines by featuring some of the famous Kapampangan dishes and the world-renowned Parul Sampernandu.