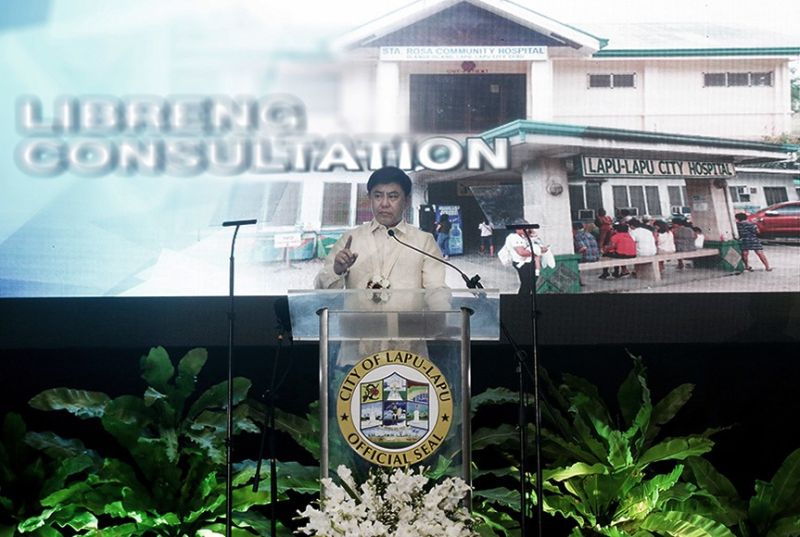 Lapu-Lapu City Mayor Junard Chan delivers a report on his accomplishments on his first 100 days in office before a packed crowd at Hoops Dome on Thursday, Oct. 10, 2019. (Photo by Alan Tangcawan)

SOME 4,000 supporters, friends, relatives and employees and officials of the Lapu-Lapu City Government gathered at the Hoops Dome in Barangay Gunob on Thursday, Oct. 10, 2019, for Mayor Junard “Ahong” Chan’s State of the City Address (Soca) where he bared his accomplishments in his first 100 days of office.

Unlike during his first privilege speech before the City Council, allies of former mayor now Lapu-Lapu City Rep. Paz Radaza showed up at the event. Chan said his current platform is in line with what he promised during his election campaign earlier this year.

He said that under his administration, medicines and medical consultations at the city health and the city hospital are free of charge. He said Phase 1 of the construction of the additional building of the Lapu-Lapu City District Hospital has been completed.

It will soon house the Malasakit Center with a monthly funding of P4 million courtesy of Sen. Bong Go. Senior citizens can also have their cataracts removed for free at a private clinic in Barangay Agus, he said.

The mayor revealed that he already officiated the wedding of 26 couples for free. He said the City will hold a mass wedding next month in time for the annual fiesta.

The City will also shoulder the cost of the reception. Chan said senior citizens who have had their birthdays have received P1,000 each and a cake from his office.

He also clarified that no persons with disabilities (PWDs) have been fired since he assumed office, saying they are looking for PWDs to apply for jobs at the City Hall.

He assured informal settlers that there will be no demolitions under his watch unless a relocation site has been prepared for them.

The mayor said they’re preparing areas for socialized housing for the urban poor like the 25-hectare property in Barangay Canjulao.

They’re also eyeing properties in Barangays Subasbas and Pajac for this purpose, he said. In line with the Duterte administration’s war against illegal drugs, Chan announced that anti-drug operations conducted by the City of Lapu-Lapu Office for Substance Abuse Prevention resulted in the declaration of Barangay Caohagan as drug-free and the dismissal of City Hall employees who tested positive during the office’s random drug tests.

Chan said it is his dream that all the city’s barangays will be drug-free. He also praised local police for arresting 332 drug personalities and seizing 1.57 kilos of shabu since he sat in the mayor’s office.

Chan also said his office provided P40,000 allowances to students of the Lapu-Lapu City College and set up free Wi-Fi at the school. (GCM of SuperBalita Cebu / PJB