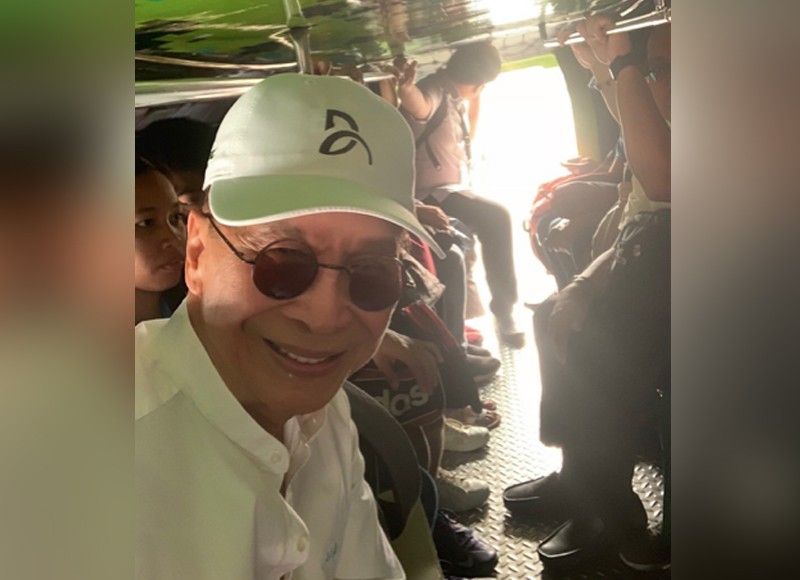 PRESIDENTIAL Spokesperson Salvador Panelo on Friday, October 11, fulfilled his vow to take public transport from his home in Marikina City to work at Malacañan Palace in Manila.

Panelo took selfies as he took three jeepney rides and experienced congested traffic along the way.

Panelo said he started his commute, without reporters and bodyguards tailing him, at 5:30 a.m. He was spotted in a public utility jeepney (PUJ) along Aurora Boulevard in Quezon City about a quarter before 8 a.m., or a little more than two hours later.

“Ang ginagawa ko talagang pinupuntahan ko ‘yung ruta ng mga nahihirapan na mga kababayan natin. I don’t have to tell you kung saan,” he said in a radio interview while he was on the road.

(What I’m doing is I’m going to routes where the public experience difficulties. I don’t have to tell you where.)

(Just like others, I have to line up and chase the jeep because at this time, passengers already occupy the seats. The jeepney is already full so you have to chase it because it would not wait for you.)

Panelo had planned to ride the Light Rail Transit after his jeepney ride, but he instead opted to get a ride from a motorist after members of the media spotted him along Aurora Boulevard.

The Palace official took public transport after he accepted the challenge posed by militant group Anakbayan to take the PUJ and train so he could experience the ordeal that an ordinary commuter using public transport faces daily.

The last time Panelo took public transport was when he rode in a taxi to Malacañang about two months ago.

The Palace official, in a press conference on Wednesday, October 10, said he sometimes takes a cab when going to work despite having his own vehicle.

(It’s ordinary for me because I have a driver but sometimes, I cannot find him because he’s asleep. So what do I have to do? Just commute. Either take a taxi or jeep.)

“So ordinaryo ‘yun. Hindi problema sa akin ‘yung pag-commute. Matagal na akong nagko-commute (So that’s ordinary for me. Commuting is not a problem for me. I’ve experienced commuting in the past),” he added.

Anakbayan posed the challenge after Panelo said there is no mass transport crisis in Metro Manila even after glitches bugged the metropolis’ three railways system.

Tugade has said he takes the train occasionally to check the coaches procured by the government from China.