Personality profile: The streets, his stage 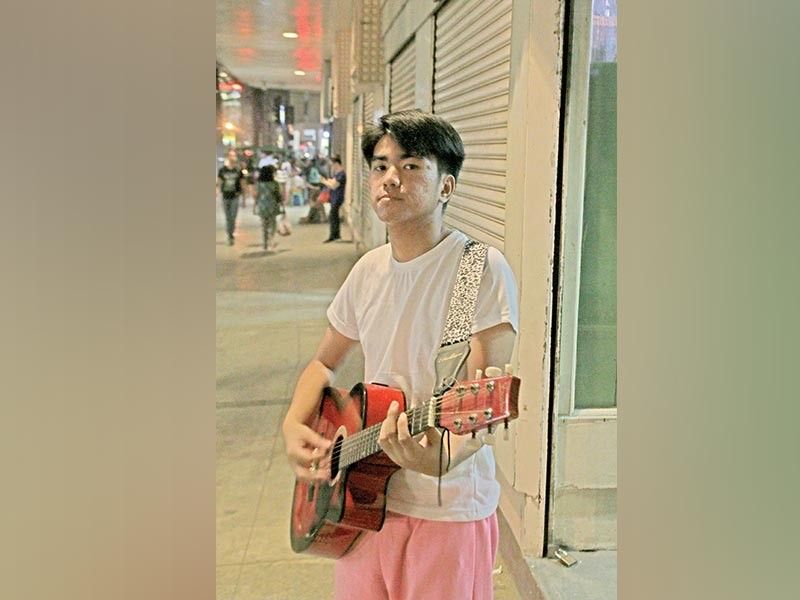 HE OWNS no guitar at first and had no place to perform but this did not stop him from doing what he is most passionate about – music and performing.

If you are a frequent passerby along Aldevinco, CM Recto St.; NCCC Victoria Plaza overpass; and JP Laurel Avenue (near Davao Mental Hospital), you probably see this lad singing with his guitar by the street amid the city’s buzz.

He is Zyrel Ranain, 21, a street performer or street busker. He serenades passersby to earn a living.

“I usually perform from the afternoon until late evening. I first had my performance at the NCCC Victoria Plaza overpass and I only collected P29 that night. Nakaingon gyud ko sa akong sarili: Naunsa naman ko oy, nganong na ingon ani man akong landas? (I told myself: Why is this happening to me?),” he shared.

But Zyrel kept on performing until people started to love and appreciate his music. He now earns an average of P300 daily.

“Before, the guitar I was using was a borrowed one from a friend. After a few months, I managed to buy it,” he said in vernacular.

But before he decided to do street busking, Zyrel has a different life, a life he now misses. He was regretful of his past decisions.

“Grabe nako ka badlungon nga anak, pabug-at sa akong mga ginikanan and tibuok pamilya. Grabe akong bisyo, gahi ko og ulo, ug sige ko og laag hangtod sa wala nami nagkasinabot sa akong pamilya, gipalayas ko. Maong naningkamot na lang ko sa akoa karon. Grabe jud akong pagmahay (I was a stubborn son. I was a burden to my parents. One day, we had a quarrel with my parents and they kicked me out from our house. Now, I am trying to live on my own. I regret everything I did before, I was immature),” he said.

But living alone was never easy for Zyrel. Doing street busking, he has been on both sides of the game. But what kept him going is his love for music.

“I just walk from our boarding house along in Sta. Ana Avenue to Victoria Plaza. I have no choice, I have to endure the scorching heat of the sun and I have to bear the long distance of walking in order to earn and do music,” he said.

He shared that the most embarrassing moment of street busking he experienced was when a passerby shouted at him: Hoy naunsa man ka? (What happened to you?).

“I cannot please everybody but at least I am not begging. But what I can tell to them, be open and considerate with street buskers. We are not solely after the money and exposure, but big part of this is pursuing our passion. If people discriminate me because of what I’m doing, I’ll just let them, I just have to be patient,” he said.

He realized that if he just took life before seriously he could have graduated and landed a decent job. But he has to move forward and take life lessons as his guide.

He plans to continue performing but he also said that he will pursue reconnecting with his family in due time, but for now he wanted to fix himself first.

“I will forever take my mistakes before as a lesson. I hope everyone will take my experience as a warning that you should always value your family. As for my music, I hope Dabawenyos will enjoy my performances on the streets, this is my simple way of giving them entertainment and happiness. After all, we all love music,” Zyrel shared.