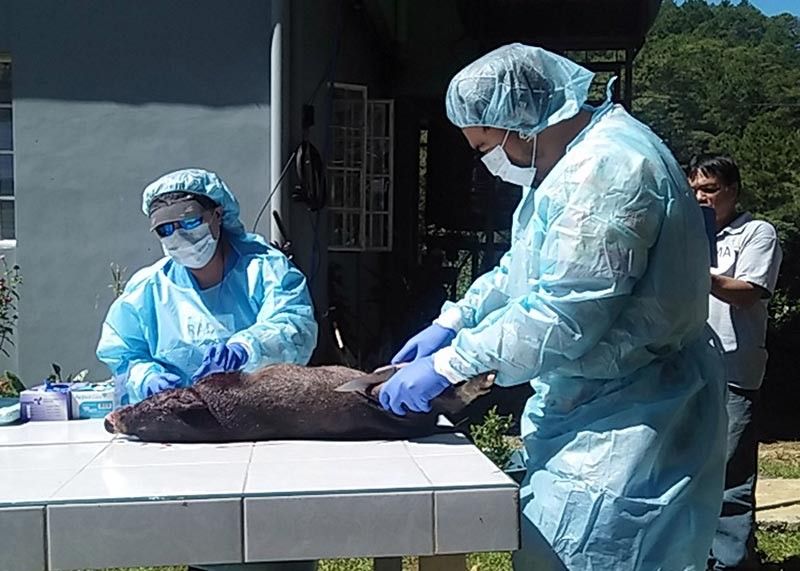 BENGUET. Samples of blood and body parts of pigs were taken during a simulation activity made in case of an African Swine Fever (ASF) outbreak in Benguet province. Officials said the Cordillera is ASF-free and pork meat is safe to eat. (Lauren Alimondo)

The activity was done to prepare the province in the event of an African Swine Fever (ASF) outbreak.

Provincial Veterinarian Dr. Miriam Tiongan said the simulation seeks to further observe points of improvement, coordination of barangay to provincial level and their strengths in responding to ASF cases.

"Here for us in Benguet, we should be ready. I would like to emphasize that pork is safe to eat. But in the case of ASF occur, we must be ready," she said.

Initial simulation started Friday, October 11, with farmers reporting on mortalities, followed by initial surveillance of dead pig, mapping and census by the barangay and census team getting data of the swine.

The scenario prepares Benguet for positive case of ASF, followed by a quarantine checkpoint set-up and task force on ASF while Rapid Action Team Deployment work on disposal, depopulation and disinfection.

Following the simulation, Tiongan said there are improvements to be made, such as coordination with officials and farmers, as well as on shedding light the indemnification fund that is given to farmers affected by ASF.

She said the financial assistance is not to replace the affected pigs, stressing it is but a small aid from the government.

Dr. Karl Kigis, regional ASF coordinator, said they have not monitored an ASF case in the province, but surveillance continues among provinces, citing Benguet as one of the main gateways to Cordillera region.

"For Cordillera, we are continuously monitoring with the help of our partners -- local government units. We are looking into reaching out to provinces, in an event it will occur, [the] provinces will be ready," he added.

Kigis said there are total of 260,000 pigs in Cordillera, with the provinces of Kalinga, Abra and Benguet having the most population.

It was also found out that a total of 27,361 kilograms of pork and assorted meat products, as well as 35 swine were denied entry to Benguet.

The Provincial Government earlier issued Executive Order 2019-36, which imposed a temporary ban on the entry of hogs and pork products sourced from ASF-affected areas.

ASF is a disease that is harmless to humans but fatal to swine.