Showtime in Tokyo for Team Lakay 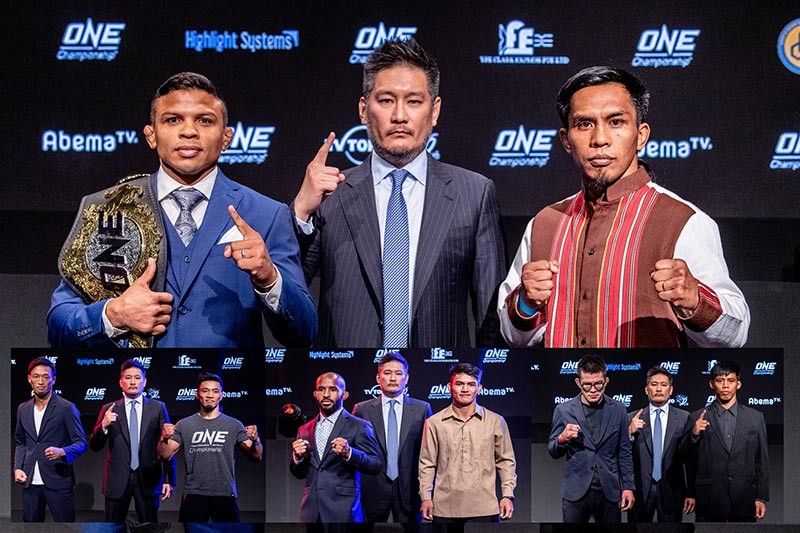 JAPAN. Team Lakay fighters against their opponents. (ONE Championship)

TEAM Lakay vowed to go all-out as One Championship rolls out its 100th historic event at the Ryogoku Kokugikan in Tokyo, Japan on Sunday, October 13.

Kevin Belingon, Danny Kingad, Honorio Banario, and Lito Adiwang will be competing in the historic fight card hoping to kick off a full packed schedule for the Baguio City based mixed martial arts team.

Belingon is keen on reclaiming the title against Bibiano Fernandes in their fourth rematch following a controversial disqualification by the Ifugao fighter earlier this year.

"It's an honor and a privilege for me to be a part of this historic event, ONE: Century. Getting to compete here in Japan excites me because of the support of the Japanese fans. This is my fourth match with Bibiano Fernandes. I trained very hard for this one and I encourage everyone to watch my fight and don't miss this historic event," Belingon said.

Kingad, on the other hand, is up for a gigantic task as he eyes a victory in the flyweight world grand prix championship finals against Demetrius Johnson, considered as he MMA pound for pound king.

"I'm happy to be back here again and competing in the most important match of my life. It is an honor to represent my country, the Philippines, and I am glad to be here with my Team Lakay family. I'm excited to showcase Filipino martial arts talent to the American audience. It's a dream come true to share the ONE Circle with a legend in Demetrious Johnson. But I believe I have the chance to beat him. If I beat him, it will be the greatest accomplishment of my career," Kingad quipped.

Banario, meanwhile, is eyeing an upset against Japanese star Shinya aoki in a lightweight match.

Completing the cast for Team Lakay is newly signed Adiwang, who recently made it to the big league after a dominating performance in Rich Franklin's One Warrior Series as he takes on Pancrase Flyweight World Champion Senzo Ikeda in a strawweight mixed martial arts bout.

Adiwang has been dreaming about this moment ever since he decided to become a full-time martial artist several years ago, but admittedly, he was surprised to be given the chance to make his first promotional appearance at ONE Championship's historic 100th event.

The 26-year-old is taking an enormous step up in competition, but he is highly confident. In fact, he wants to introduce himself to the global fanbase with the trademark style that captured Rich Franklin's attention.