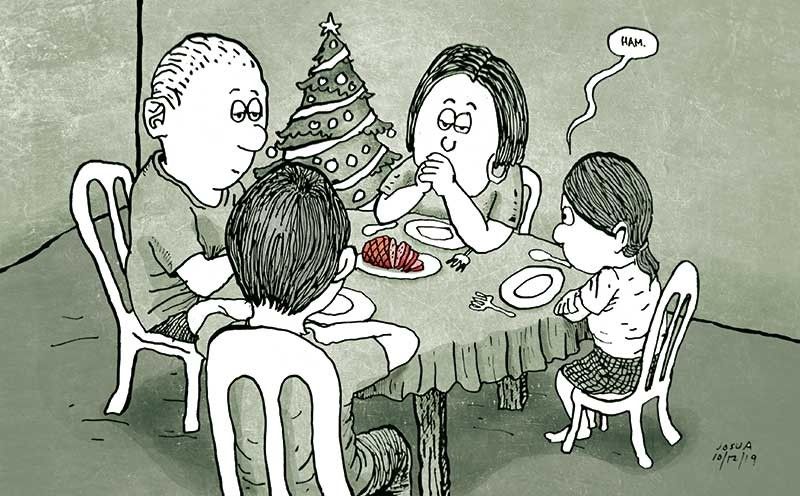 ONE of the grim reminders that the African swine fever is real is the announcement of the Philippine Association of Meat Processors Inc. that ham may be in short supply this Yuletide season.

That is, if you’re a Filipino living outside the National Capital Region.

According to the group’s spokesman, Rex Agarrado, ham is a seasonal product. Sales only go up in the last three months of the year when people start grabbing them from the store shelves to give to friends and officemates or to serve on their own tables during noche buena.

And with 20 local government units imposing a total ban on Luzon-based pork products, including ham, and 26 others imposing conditional bans, supply is bound to be scarce in many parts of the archipelago. That also means prices will likely skyrocket.

So how did ham become a traditional Filipino Christmas fare?

According to food historian Felice Prudente Sta. Maria, author of award-winning The Governor-General’s Kitchen: Philippine Culinary Vignettes and Period Pieces, 1521-1935 and The Foods of Jose Rizal, ham was first a maritime staple.

Merchant ships during the Spanish period carried two kinds of ham as part of their provisions, she said.

“From Europe came Spanish types although the exact kind has not been specified in archival documents. They just say hamon. These would arrive around Easter on galleons from Acapulco and could be preserved ‘til Christmas. Meanwhile, as early as 1588, Chinese style hams arrived in Manila. Bishop Domingo Salazar documented that every November, 20 Chinese trading vessels would anchor until May. They brought in salted pork and hams, chestnuts, pineapples, Chinese oranges, among others,” she said.

Sta. Maria, though, doesn’t talk about what the average Filipino prepares at home.

A quick search on the internet showed the top six foods served at this time of the year: lechon, chicken galantina, paella (valenciana), fruit salad, fruitcake and, of course, ham.

But the list is hardly typical. After all, how many Filipinos can afford to have lechon, know how to prepare paella or actually like the taste of fruitcake? Do they even know what a chicken galantina is?

At the end of the day, it doesn’t matter what is served. Ham or no ham, what matters is you spend the occasion with your loved ones.