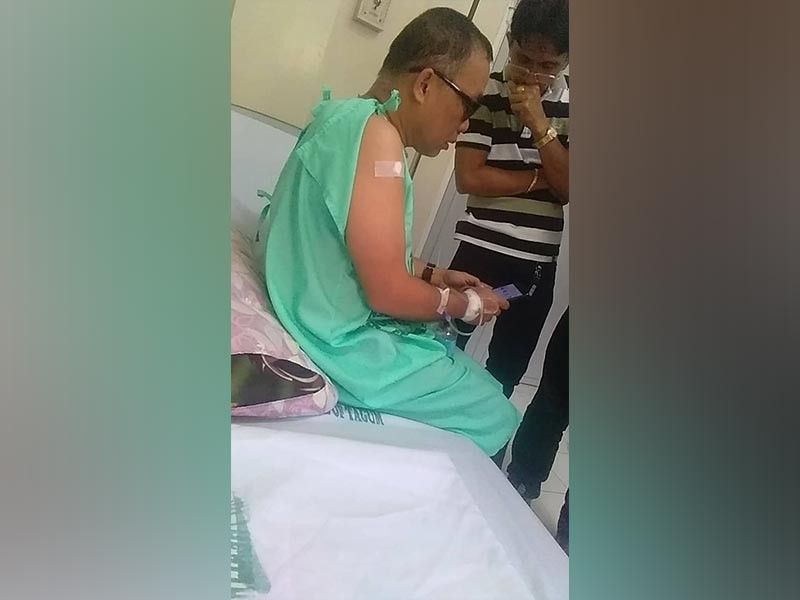 In the initial investigation, at about 8:06 a.m. on October 11, the personnel of Tagum City Police Station (TCPS) were dispatched for possible apprehension of the suspect while duty investigators proceeded to the place of incident to conduct ocular inspection.

During an interview, the victim said that he was on his way home from his radio program onboard his white Ford Eco Sport when the unidentified suspect shot his vehicle several times.

Not contented, the suspect pointed a gun directly at the victim but the latter managed to evade by accelerating his car.

The suspect then fled towards an unknown direction onboard a white Yamaha XTZ motorcycle. Investigators who were at the scene of the crime recovered two fired cartridge cases, one cartridge and one deformed bullet all believed to be from caliber .45, which will be submitted to Davao del Norte Provincial Crime Laboratory Office (DNPCLO) for examination together with the vehicle for trajectory examination.

In the Facebook live of MindaNet Balita Friday, Pacquiao was being interviewed by the policemen. He said that he did not notice that people were tailing him. He suspected that the gunmen were following him after he got out of his radio station.

The incident happened when he was about to stop his vehicle near his house when he heard two gunshots and after that, the gunmen went near him. He even remembered the face of the suspect who was wearing a blue cap and was covered with a handkerchief.

He was just glad that he was not wearing a seatbelt at that time so he was able to evade the gunshot. He was brought to Medical Mission Hospital for immediate treatment after he sustained a minor injury.

Authorities are currently investigating the motive of the incident and if it has a connection with his profession.

It can be recalled that a journalist was gunned down on June 7, 2018 in Panabo City, Davao del Norte by unidentified motorcycle-riding assailants. He was identified as Dennis Denora, 67, publisher of Trends and Times in Panabo City and former contributor of SunStar Davao. He was shot dead while onboard his vehicle together with his driver in Barangay New Pandan, Panabo City.