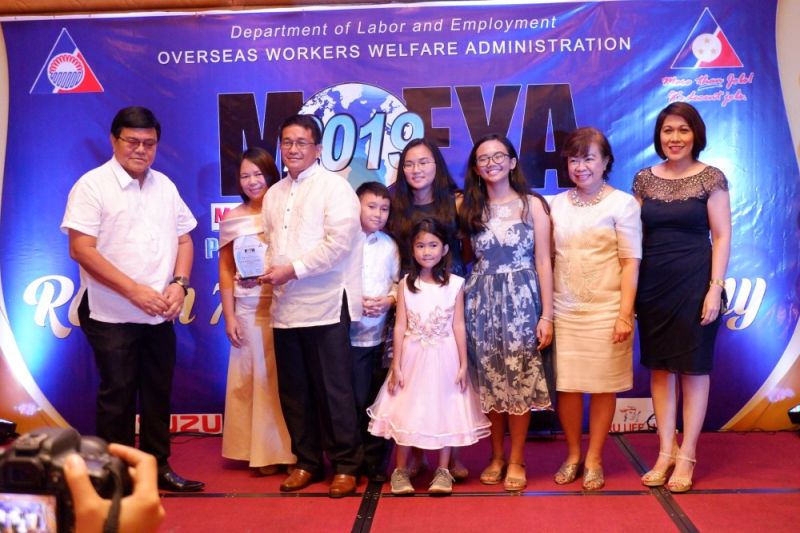 OWNING the responsibility to provide for the household, Donna Ofamin took the leap of faith to work overseas as a domestic helper.

She decided to leave her hometown in Maribojoc, Bohol to become an overseas Filipino worker (OFW) in Hong Kong.

On Friday, Oct. 11, 2019, her family was given the Regional Model OFW Family of the Year Award (MOFYA) 2019 for the land-based category by the Overseas Workers Welfare Administration 7.

The family of Ananias Legarde, a former seaman from Oslob, Cebu, was named Model OFW Family of the Year in the sea-based category.

He decided not to renew his contract in 2016 to focus on reconnecting with his wife and children.

For Legarde, the hardest part of working abroad is missing his loved ones at home.

During the awarding ceremoney, emotions ran high when the Ofamin family heard their matriarch’s name called as the land-based category awardee.

Donna was not present during the awarding ceremony but her husband, Rolando, and their children received the award in her behalf.

Rolando was teary-eyed during his speech as he looked back on the struggles their family went through. He said he realized that all the hardships were just God’s way of making their family stronger.

He recalled how they were able to bounce back after a seemingly hopeless situation.

The family began having financial problems after their business buying and selling second-hand vehicles suffered losses.

Rolando recalled that at one point, they resorted to selling plastic scraps just to survive.

Their son worked as a crew member of a fast food chain while Rolando tried to work abroad. He failed to land a job in Singapore.

Rolando was thankful that his family endured all the trials, espcially since they were used to a comfortable life.

Since Donna left for Hong Kong, the Ofamin family said they all became closer and their relationship with God became stronger.

MOFYA aims to recognize and honor outstanding OFW families who have displayed exemplary achievements in family solidarity, academic success, civic and community involvement and financial management in the household.