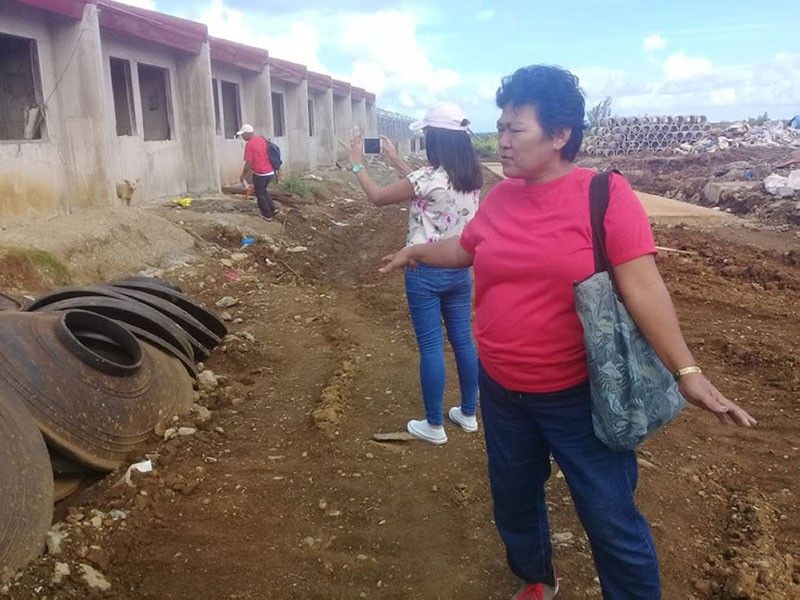 EASTERN SAMAR. Lita Bagunas, Yolanda survivor and leader from Community of Yolanda Survivors and Partners (CYSP), points to the housing units in Giporlos, Eastern Samar, which they claimed as “too small, too hot, and substandard”. (Ronald O. Reyes/File photo)

THE Community of Yolanda Survivors and Partners (CYSP) has welcomed the filing of cases against erring contractors and National Housing Authority (NHA) officials over the bungled resettlement projects for storm victims six years ago.

“CYSP has been calling for the government to be more decisive in dealing with anomalies on housing reconstruction in Yolanda avenue and to be more people-centered and participatory to avoid anomalies from occurring. It also called for a serious performance and financial audit of Yolanda reconstruction,” the group said.

On Friday, October 11, the Presidential Anti-Corruption Commission (PACC) announced that they will file more cases against public officials and private individuals who were allegedly responsible for the delayed and “substandard” housing projects.

At least 12 NHA officials were already facing charges for violation of the Code of Conduct and Ethical Standards for Public Officials, Government Procurement Act, and the Anti-Graft and Corrupt Practices Act before the Office of the Ombudsman last October 9, said PACC Chairman Dante Jimenez.

Lita Bagunas, president of Uswag Este-Katarungan and member of CYSP, said that as a result of the inadequacies in housing reconstruction, more than 50,000 housing units classified as “ready for occupancy” have no takers as survivors refused to relocate.

“These unoccupied housing units represent more or less P15 billion in public funds. The fact that it cost a lot, however, should not be the basis of forcing people to occupy,” said Bagunas.

“Major investigations, one by the Senate, and another by the House of Representatives, were also conducted to investigate the complaints of the survivors. Likewise, then Special Assistant to the President also initiated grassroots consultations in response to the demand of CYSP for the voices of survivors to be heard.

“Unfortunately, the processes did not produce any report that could have improved government response on Yolanda survivors,” claimed Pardiba Gamalu, Coordinator of Freedom from Debt Coalition-Eastern Visayas, a CYSP member.

CYSP maintained in legitimizing the substandard houses, the NHA instead asserted that the housing construction were merely defective that can be remedied.

“It is through these exposes that substandard housing and dancing houses’ to describe swaying of walls due to poor construction were coined and made public. Unfortunately, the NHA chose to ignore the plea of survivors to investigate these anomalies,” said CYSP in a statement.

Vincent Basiano of G-Watch, a member group of CYSP, said that Yolanda survivors continue to resist relocating to “completed” housing projects “precisely because many resettlement sites are substandard and lacking in basic facilities, have no livelihood and social or support services, and are far from survivors’ sources of livelihoods resulting in their economic displacement.”

While they lauded the move of PACC, the storm survivors urged the national government to assess the structural integrity of the housing projects and stop the forced relocation of survivors while the report on structural assessment is not yet made public.

They also called on President Rodrigo Duterte to “continue and meaningfully complete housing reconstruction across the Yolanda Corridor through a people-centered and participatory approach.”

“Ensure that sustainable livelihood is integrated into the relocation plan. Release and publish Senate and House investigation reports and consider the recommendations thereof in pursuing cases against erring officials and contractors and in reforming Yolanda reconstruction,” CYSP said.

According to the state-ran Philippine News Agency, the government already poured P67.1 billion for the rehabilitation in Eastern Visayas from 2013 to 2017.

However, majority of the housing and resettlement sites have remained substandard, according to CYSP.

In Eastern Samar alone, survivors served the NHA a “notice of refusal” to make it known that they would not accept housing projects that are substandard, without access to livelihood and social services.

CYSP has also demanded for the demolition of substandard houses. (SunStar Philippines)