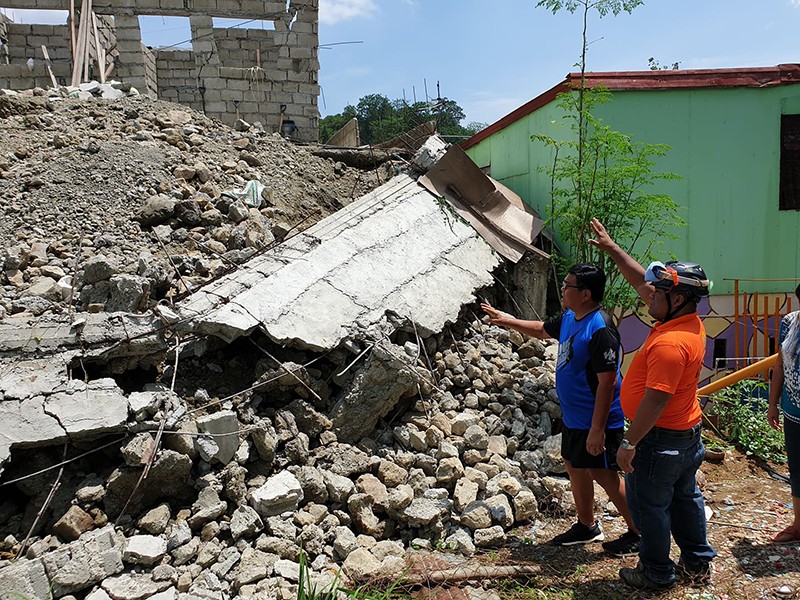 FIVE families were ordered to evacuate their homes in Sitio Sugarlandia, Barangay Bacayan, Cebu City after a wall being developed by a subdivision there collapsed on Saturday morning, Oct. 12, 2019.

Cebu City Mayor Edgardo Labella visited the area and ordered the housing developer to stop its ongoing construction of 20 one-story apartments there.

Labella also ordered Jess Carlo Miñoza, who identified himself as the developer, to monitor some parts of the collapsed wall, especially since it is leaning to some houses situated near their development.

Barangay Bacayan chief Zenaida Colina said the developer has already transferred the affected families to a safe area within their village.

No one was hurt during the incident.

Lily Caratayco, one of the affected residents, told Superbalita Cebu that while her children were sleeping, she heard someone outside her home saying that the wall facing their house was about to collapse.

When her husband decided to check it out, it was then that the wall collapsed, Caratayco added.

Based on an initial investigation conducted by the Cebu City Office of the Building Official (OBO), the developer was not able to secure a building permit for the construction of 20 one-story apartments in the area.

No building consultant or supervising engineer was present when the wall was constructed near the houses.

Labella said he also found that the materials used to construct the wall were weak and could cause harm to nearby residents if not addressed immediately. (JKV)