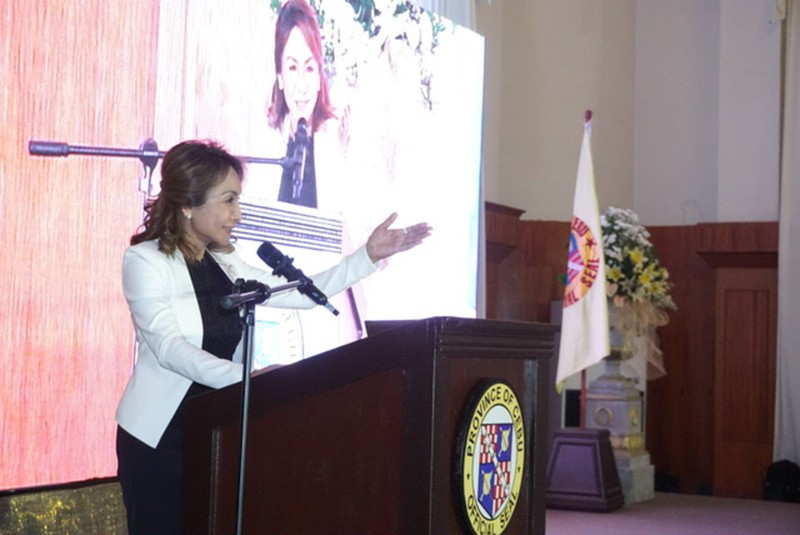 Video Report. Gov. Gwendolyn Garcia delivers her State of the Province Address in a 35-minute video report on Saturday, Oct. 12, 2019, in time for her 64th birthday. (SunStar Photo/Alex Badayos)

PROJECTED revenues, assets and savings of at least P4.44 billion sourced from different endeavors were among the highlights in the first 100 days of Cebu Gov. Gwendolyn Garcia.

The governor, though, decided to deliver her State of the Province Address on Saturday, Oct. 12, in time for her 64th birthday.

Before presenting her 35-minute video report, Garcia said the first 100 days of her fourth term as governor had been “interesting, exhausting yet invigorating.”

“It is usual for us to go home at 11 in the evening, but I guess the record holder was the other day when we went home at 3 a.m. That should tell you what our days had been these past three months,” she said.

The video report opened with a recap of the first measures Garcia executed, starting on July 1, 2019.

Right after assuming the governorship, Garcia issued Executive Order (EO) 1 to immediately stop and permanently discontinue all works related to the P1.3 billion Provincial Resource Center inside the Capitol compound.

Had the Province pushed through with the project, Garcia said it would have “defaced the cultural heritage” of the Capitol building and put the Cebuanos in huge debt.

“Upon inspection, we saw the prior construction activity has left huge gaping holes on the ground that the contractor refused to restore to level ground. We faced a nuisance that endangered the public and the surrounding structures, but this problem was shortlived.

Kindhearted members of the Visayas Truckers Association and other civic-minded Cebuanos banded together and, in the spirit of bayanihan, backfilled the excavated area of the project site at no cost to the Province,” she added.

The governor lamented that before the “cost-cutting measures” were implemented, there were over 2,141 casual and job-order employees whose salaries amounted to P564 million annually.

By letting go of some temporary workers, the Province will now be able to save over P300 million.

“These savings can now be diverted to infrastructure and livelihood projects that will uplift the lives of the Cebuanos,” Garcia said.

Aside from this, the Province has also increased the extraction fees for the quarrying of sand and gravel, limestone and other minerals.

The increase in fees is projected to generate over P200 million in revenues for the next year, or P133.6 million higher than the income collected in 2018.

Meanwhile, the recall of all Province-owned ambulances from different component municipalities and cities led to the redistribution of medical vehicles to the 16 provincial and district hospitals.

Regaining ownership of prime lots on Salinas Drive in Barangay Lahug, Cebu City and five access roads to the Cebu IT Park were also seen as highlights of her first 100 days.

On Aug. 19, 2019, a memorandum of agreement (MOA) was executed between the Province and a property developer.

The execution of the MOA led to the turnover of the lot and a P25 million showroom, adding to the Provincial Government’s growing source of assets.

On Sept. 23, 2019, officials of Ayala-led Cebu Property Ventures and Development Corp. and Garcia entered into a MOA mutually terminating an earlier deal that granted the former perpetual road right-of-way.

“As an added bonus, the long-held restriction limiting the use of our 6,000-square-meter property fronting (the Cebu) IT Park to a parking lot has now been lifted. Now, the Province can maximize the commercial and economic potential of this prime property for the benefit of the Cebuano people,” Garcia said.

Garcia and officials of Filinvest Land Inc. (FLI) also signed a deed of conveyance on Tuesday, Oct. 8, 2019, in relation to Tower Two of the FLI-managed Cyberzone Cebu (FCC) in the Cebu IT Park.

In April 2016, FLI turned over to the Provincial Government the first of four buildings of the FCC.

For both buildings, the total development and construction cost was P3.8 billion, increasing the Province’s assets by the same amount.

FLI also pays Capitol P600,000 a month for the 1.2 hectare lot where the towers stand, plus two percent of the gross revenue or P500,000 a month, whichever is higher.

Apart from business deals and fees, another source of savings the Garcia administration is eying is turning over the management of the MyHome facility in Barangay Tayud (Consolacion town) and the Women and Children Development Center in Barangay Sudlon (Cebu City) to the Department of Social Welfare and Development.

This move will realize savings of P20 million for the Province, the governor said.

Aside from this, the downgrading of the Provincial Disaster Risk Reduction and Management Office, Cebu Provincial Anti-Drug Abuse Office, Provincial Tourism Office and the Cebu Provincial Investment and Promotions Office into divisions under the Office of the Governor is also expected to generate annual savings of at least P100 million for the Capitol.

For medical services, Garcia said the Capitol will work on upgrading the provincial hospitals in the cities of Bogo, Carcar and Danao and the town of Balamban from Level 1 to Level 2.

The Provincial Government has also embarked on a partnership with the Housing and Land Use Regulatory Board (HLURB) to develop Capitol’s 17-hectare property in Barangay Busay, Cebu City to provide housing to provincial government employees and other qualified beneficiaries.

Under the memorandum of understanding signed last Oct. 7, the construction and land development will be shouldered by the HLURB at no cost to the Province.

The governor also issued EO 18 on Sept. 18, convening the Economic Enterprise Council for the body to come up with terms of reference to bid out the proposed waste-to-energy facility in the City of Naga as well as other economic enterprises planned for the Provincial Government.

Capitol’s first supplemental budget worth P1.38 billion, which was passed last Aug. 5, also paved the way for the concreting of 80 kilometers of provincial and barangay roads in all seven districts; development of Level III water systems in the towns of Carmen, Moalboal, Camotes and Pinamungajan; and the construction of two school buildings for the Cebu Technical University campuses in Balamban and San Fernando.

Covered courts for the barangays as well as health stations will be constructed as well.

Meanwhile, efforts to decongest the Cebu Provincial Detention and Rehabilitation Center now include coordinating with the Integrated Bar of the Philippines, Public Attorney’s Office, Cebu Lady Lawyers Association and the Regional Trial Court.

Barangay workers will also get double their cash incentives from Capitol in December. Barangay officials and workers were also enrolled in the group accident insurance program of the Government Service Insurance System.

As for the Pasigarbo sa Sugbo, Garcia said the “festival of festivals” did not only make a comeback last August after a six-year hiatus, but it also had the most number of participants since the program started. The Capitol has also relaunched athletic events, such as the Guv Cup and airsoft games.