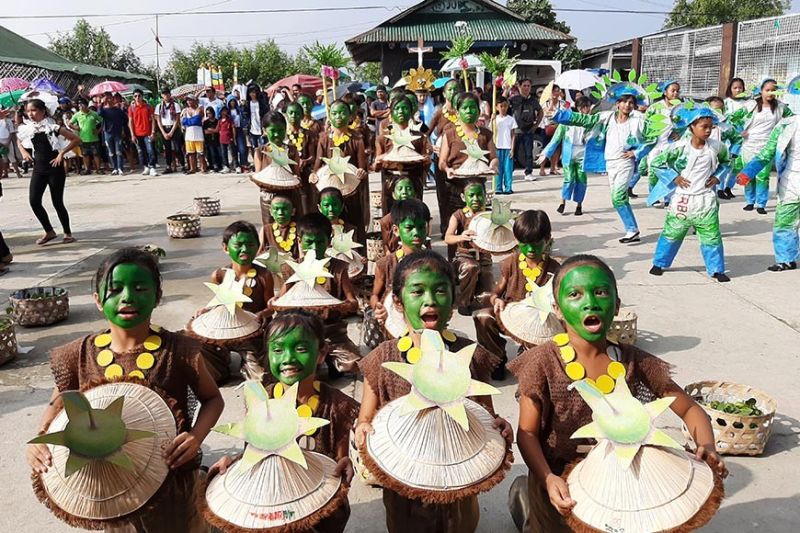 PAMPANGA. Students of a public elementary school in Masantol town showcase the palapat fruit in their costume for the Palapat Festival streetdance competition. (Photo by Princess Clea Arcellaz)

PRODUCTS made from palapat (apple mangrove) fruit were highlighted during the 1st Palapat Festival organized by local communities.

The festivity, hosted by parishioners of Holy Rosary Parish in partnership with the Municipal Tourism Office, was held in coastal barangays of San Pedro and Bulacus in this town.

“When I was told that I would be assigned in Holy Rosary Parish in Barangay Bulacus, I asked where is Bulacus? And it is the same reaction I get when I tell people about Bulacus. It is hardly known even by fellow Kapampangans so I was challenged to think of creative way on how to introduce this place to the people,” Salonga said.

Upon docking at the makeshift port on his arrival to Barangay Bulacus where the Holy Rosary Parish is situated, Salonga said the abundance of palapat plant is what first hit his curiosity.

“I asked what plant was it and they told me it was palapat. I asked if it is edible and it was when I was informed of its long list of uses in culinary and its roles in the community,” he said.

The coast of Pampanga River in Masantol is abundant with palapat plant as it grows naturally in saline water. It serves as natural protection of the community from water surges.

Due to its abundance in the area, residents have also thought of many ways to use the plant and its fruit such as as an ingredient in various cuisines and delicacies.

Jams, tarts, candies, vinegar and souring agent for local cuisines such as sinigang and paksiw are only among the dishes created by residents here out of the palapat fruits.

Its roots are also used to make cork while its top-part as Christmas trees during the holiday season.

“Knowing of all these, I already knew that a festival would be the perfect way to introduce our communities here while at the same time promote palapat delicacies which some locals have made livelihood of,” he said.

Municipal Tourism Officer Mercy Pangilinan, for her part, said that the local government is committed to making Palapat Festival an annual event in town.

She stressed that the event is not only expected to boost the tourism activity in town, but also gives identity to some of its remote villages.

“The Palapat Festival is not only hitting two but three birds in one stone as it benefits tourism, livelihood and culture and history of our town and it is only fitting that we support and make this an annual event,” she said.