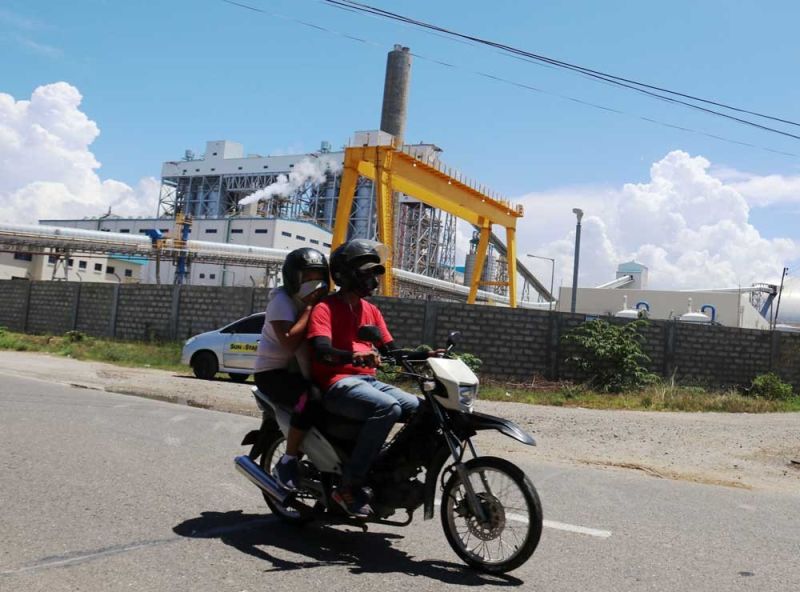 WHAT’S THE SMELL? A female passenger covers her face as the motorcycle she is riding passes by the coal-fired power plant in Barangay Bato, Toledo City, Cebu. Several residents of Barangays Bato and Cabitoonan have complained about the stench coming from the facility, which is operated by Therma Visayas Inc. (SUNSTAR FOTO / AMPER CAMPAÑA)

TO THRESH out concerns on skin and respiratory illnesses raised by residents of two villages in Toledo City, Rep. Pablo John Garcia (Cebu, third district) said he will discuss the matter with authorities and the management of a power plant.

Several esidents of barangays Bato and Cabitoonan suspected that the skin irritation and respiratory diseases that they had developed were caused by the ashes and stench coming from a nearby power plant.

To help them address these concerns, residents sent petition letters to their respective barangay leaders regarding their complaints. The same petitions were sent to Garcia’s office.

“I myself have received complaints about this. I will take this up with the authorities and Therma Visayas,” Garcia told SunStar Cebu in a text message on Saturday, Oct. 12, 2019.

According to TVI’s statement, a possible source of the foul smell was the spontaneous combustion inside the coal dome. Dust found outside the coal dome was caused by prolonged storage of coal but the company assured that these would soon be addressed when the coal is moved and used.

SunStar Cebu also tried to reach Toledo City Mayor Joie Perales, but she was not available as of press time.

A team from the Toledo City Environment and Natural Resources Office went to the barangays last Thursday, Oct. 10, and it failed to notice any stench. (RTF)