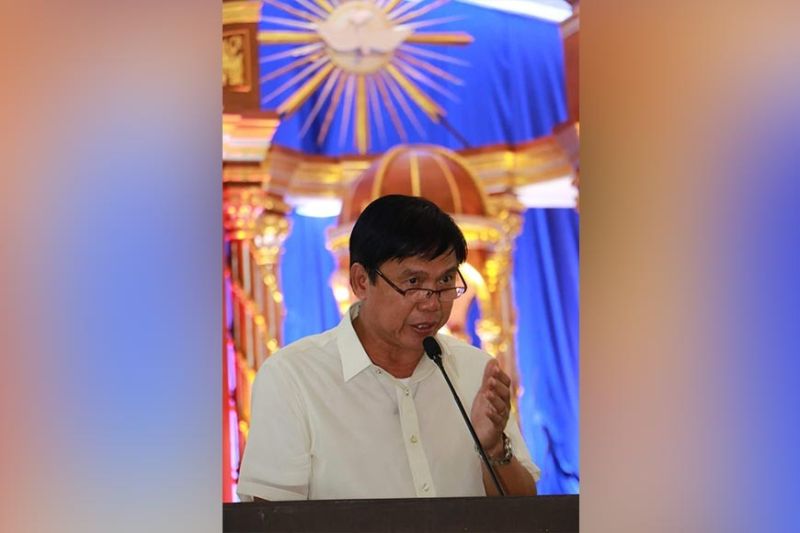 PAMPANGA. San Simon Mayor Abundio Punsalan, Jr. delivers on October 12, 2019 his state of the municipality address which highlighted his many accomplishments, programs and projects in his first 100 days as local chief executive at Nuestra Senora del Pilar Parish Church. (Photo by Chris Navarro)

FIRST-TERMER Mayor Abundio “Jun" Punsalan, Jr. had mixed feelings after he concluded his official report to his constituents over the weekend to mark his first 100 days in office.

“Tired, but fulfilling” was how Punsalan described the past three months since he assumed his first public office.

“It was overwhelming because it seems like there is always a lot to do. For the past 100 days, I had this feeling like 24 hours is not enough for my duty but at the end of the day, there is always a smile on my face,” he said.

In his report, Punsalan said he was able to implement numerous projects that are in line with his agenda of developing all sectors of the community.

This includes health sector through the acquisition of ambulances and construction of a dialysis center; environment sector through regular clean-up drives; youth and sports through the hosting of National Ping-pong qualifying round; agriculture sector through assistance to farmers and poultry and hog raisers; and peace and order through the town’s achievement of drug-cleared status.

He acknowledged the support of his fellow local officials and municipal employees which led to the smooth downloading of the projects to the community.

Before he ended his report, Punsalan asked his audience to join him in his next 1,000 days in office as he fulfills his duty of bringing progress to San Simon.

“All of these are just an overview of how committed my administration is in developing San Simon. My first 100 days is over, let us now jointly face the next 1,000 days with a vision of a better tomorrow for our town,” he said.

Asked what Simonians should expect on his first term, Punsalan cited some of his priority projects which include the construction of the San Simon Community Hospital, upgrading of major thoroughfares, installation of street lights and increase in number of social program beneficiaries.

“I cannot do everything if I am on my own so I encourage everyone to help me in my quest to uplift the lives of our fellow Simonians,” he said.