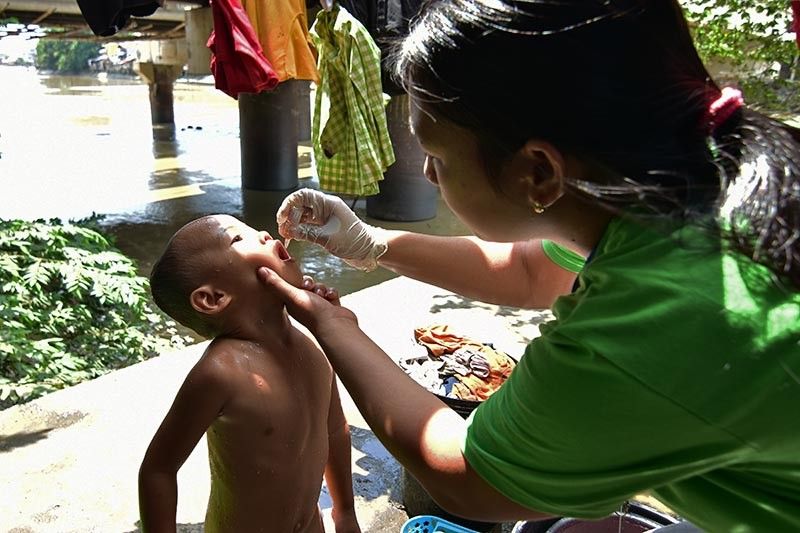 DAVAO. A young boy takes a short break from his morning bath as barangay health workers arrive outside their house in Barangay 5-A, Bankerohan Riverside to give oral polio vaccine to children five years old and below. The health workers conducted a house-to-house vaccination in line with the Sabayang Patak Kontra Polio launching in Davao City Monday, October 14, 2019. (Macky Lim)

THE massive vaccination campaign against polio, dubbed as the Sabayang Patak Kontra Polio Campaign, took off Monday, October 14, at the Barangay 5-A gym in Bankerohan.

Unlike any other vaccination campaign, it included songs and games that entertained the residents who participated during the activity.

Children zero to 59 months or children not older than five years old were given oral polio vaccines regardless of their immunization status. It was administered by the City Health Office (CHO), Department of Health (DOH), and World Health Organization (WHO) alongside with the United Nations Children's Fund (Unicef) and officers from the Philippine National Police (PNP).

Most of the mothers, in random interviews conducted during the activity, said they are no longer afraid of vaccination since according to them, the CHO already explained what it was for, how it would be administered, and the benefits for their children.

The parents were also informed about the possible adverse effects on their children should their young ones skip vaccination.

The CHO said vaccines are still available at the health center every day, including weekends. House to house immunization was also conducted by the CHO staff, including daycare centers to ensure that vulnerable children will be vaccinated to prevent them from being infected with the crippling and fatal disease.

The campaign will be expanded to the other parts of Mindanao on November 25 to December 7, and last round on January 6 to 18, 2020.

"Complete vaccination against the polio virus is the best way to prevent the transmission of the disease. Let us all take part in this Sabayang Patak Kontra Polio, ensuring all children less than five years old are all protected against polio virus," DOH-Davao said.