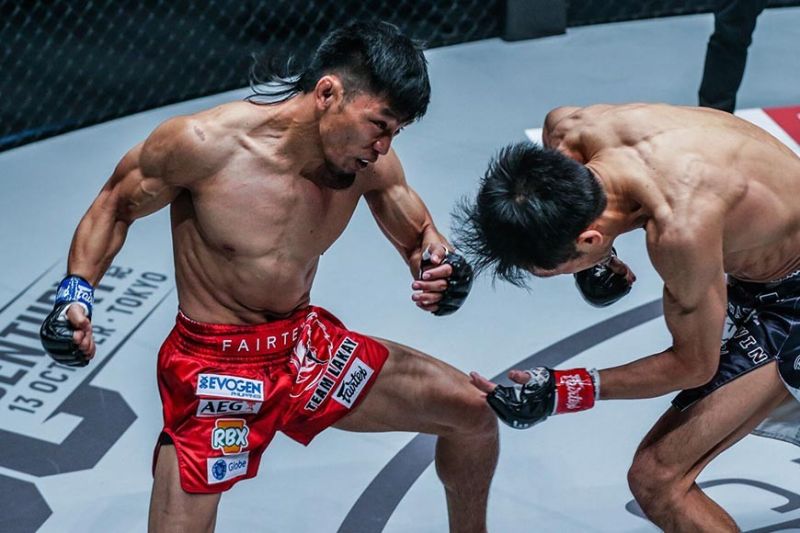 BRIGHT SPOT. With four other Filipinos unsuccessful in their One Championship bout Sunday the Ryogoku Kokugikan in Tokyo, Japan, Lito Adiwang made his debut a memorable one submitting former Pancrase champion Senzo Ikeda of Japan in the first round. (One Championship photo)

The newly One Championship signed Team Lakay fighter wasted no time in making an impressive debut after submitting former Pancrase champion Senzo Ikeda of Japan in the first round.

Known for his striking, Adiwang showed off a different facet of his game as he scored an early takedown and immediately executed a scarf-hold armlock. The bout was stopped just moments later after Ikeda suffered an injury to his arm, giving the stoppage win to Adiwang.

Adiwang’s exploit was not enough however to get the Team Lakay going as three of his team mates falter in the stacked fight card of ONE: Century at the Ryogoku Kokugikan in Tokyo, Japan.

Despite falling short, Johnson was all praises for Kingad who escaped a deep kimura in the first round including an armbar in the second.

Displaying his freakish athleticism, the 33-year-old continuously attacked the Baguio City native on the canvas, landing efficient ground and pound from the top before quickly transitioning into a slick armbar.

Kingad defended with the submission attempt with one of his own, but Johnson remained patient, escaped, and stayed on top until the bell sounded at the end of the frame.

The American remained aggressive in the third, this time controlling Kingad from the side position. From there, he landed a plethora of well-timed elbows and knees.

In their fourth ONE Bantamweight World Championship clash, the Brazilian dominated and then submitted his long-standing adversary with a rear-naked choke in the second round.

After a brief exchange on the feet, Fernandes immediately shot in for a successful takedown, landing in side control. The Brazilian controlled Belingon with his top game for the majority of the first round. The second round saw Belingon come out firing, but Fernandes was relentless in his pursuit of the takedown. As Belingon left Fernandes an opening, the champion swiftly capitalized to take his back. Moments later, Fernandes sunk in a deep rear naked choke to force the tap.

Aoki wasted no time after the opening bell rang and quickly secured a body lock to set up a takedown inside the first 30 seconds.

As soon as the contest hit the ground, the result seemed like a formality for “Tobikan Judan” as he landed in half guard. The Evolve representative pressured the Filipino into exposing his neck, and then pounced the instant an opportunity to finish opened up.

As Banario looked to break free, the Japanese submission specialist quickly transitioned to a tight D’Arce choke that left no room for the man from Team Lakay to escape.

Heavyweight world champion Brandon Vera was also denied of becoming a two weight class champion after getting knocked out in the second by Aung La N sang in their light heavyweight title clash.

These two icons went toe-to-toe in a spectacular striking encounter that thrilled the fans inside the Ryogoku Kokugikan, and it began as Aung La N Sang pushed forward and landed a succession of powerful leg kicks.