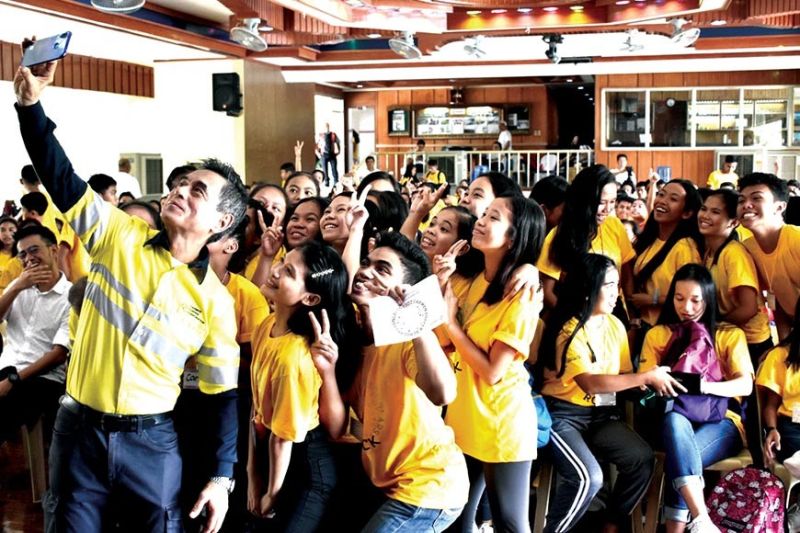 CAPTURING FUTURE. Carmen Copper president and chief executive officer Roy O. Deveraturda snaps a picture with the company’s scholars after his inspiring talk on the role of the youth in community building during the 2019 Carmen Copper Scholars Congress in Toledo City, Cebu. (Contributed photo)

MORE than 350 students in Toledo City, Cebu took the challenge to become agents of change by becoming responsible stewards of the natural environment.

These students are scholars of Carmen Copper Corp. They gathered during the recently held Scholars Congress that heralded the theme, “Youth Shaping the Community We Need.”

The whole-day learning and team building activities equipped them with lessons for their personal growth. The congress was a call to action for the young people to initiate and take active part in community building that is aligned with Carmen Copper’s goal to build self-reliant communities in Toledo City.

“You represent the future and the hopes and dreams of this generation. You have the power to change and that change must come now. If you can change for the better by even just a tiny, unnoticeable bit every day, the future is clear and bright,” said keynote speaker Carmen Copper president and chief executive officer (CEO) Roy O. Deveraturda, who further said that transformation must start from within one’s self.

Deveraturda inspired the scholars by sharing his journey from being a homeless boy to becoming a president and CEO of one of the largest producers of copper in the country today.

He told the scholars that perseverance and resilience are his guiding principles in overcoming great odds.

He told the scholars to “keep on dreaming.”

“Don’t be mindful of your past, except to learn lessons. Prove that living in poverty, living in pressure can be an opportunity for you,” he said.

A responsible steward is committed to care for both the earth and neighbors.

As students and young leaders, Carmen Copper scholars are expected to use their full potential and creativity to address the challenges and needs of their communities.

First-year Aircraft Maintenance Technology student Myfel Jaeia Fuentes, 19, was a student leader back in high school; she has been involved in various volunteer and civic activities both in school and the barangay.

She believes that as a young citizen it is her duty to contribute to her community by actively participating in the Barangay Anti-dengue Task Force in Barangay Don Andres Soriano where they do awareness campaign on dengue prevention and control. Fuentes used to be a student government officer and had led fellow students to do various volunteer works.

Kayza Grace G. Lauron, 20, is taking up Religious Education at a Bible college in Cebu City. She wants to foster spiritual growth in her community and help young people find their true purpose in life.

She said some people focus on things that do not matter and are not beneficial to them spiritually like partying, drugs and other distractions brought about by modern lifestyle.

“I want to spread the Gospel,” she said.

Lauron lost her father in an electrocution accident when she was five years old. Her mother succumbed to a brain tumor in June 2018. Her mother’s death almost led her to breaking down from depression, but she later found peace and healing with her Christian faith.

“If I did not know God, I may have lost my sanity or I may have ended my own life... But I’ve seen the hands of God because even if we were buried in debt, we never experienced hunger,” she said.

Carmen Copper, through its Social Development and Management Program, invested in the education of 359 children from poor families in Toledo City for the 2019-2020 academic year.

Aside from academic scholarships, Carmen Copper has also provided technical vocational trainings to out-of-school youth and unemployed residents, many of whom have already gained employment.

The company has also been building classrooms and covered courts; it has also been improving school facilities to promote quality and inclusive education.