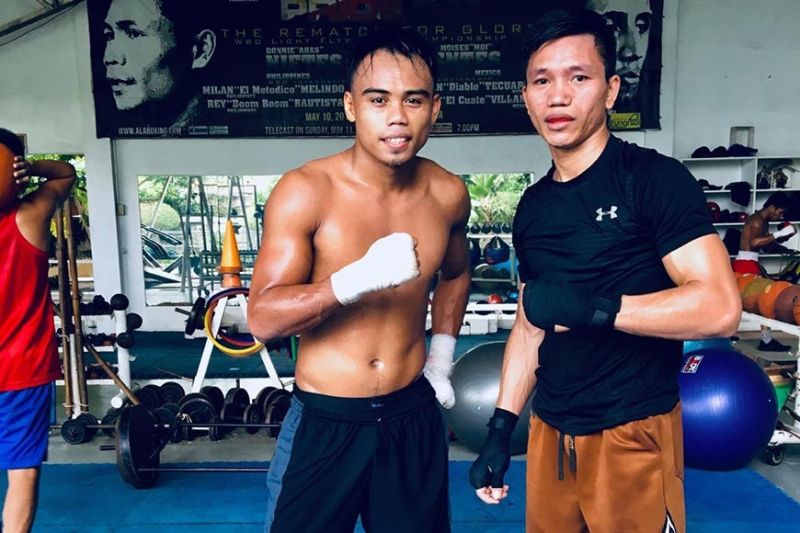 RING RETURN. Jay-ar Aliasot (right) will make his ring return in the “Brawl at the Mall” on Oct. 20. (Contributed photo)

FOLLOWING a long hiatus due to a shoulder injury, Jay-ar Aliasot gets his career back on track as he takes on unbeaten knockout artist Carjun Carcosia in one of the featured fights of the Sanman Promotions’ “Brawl at the Mall 13” on Oct. 20, 2019 at the Robinsons Place Atrium in General Santos City.

“It’s a waste if I end my career just like that. I will try to come back,” the 24-year-old Aliasot told SunStar Cebu.

Aliasot was one of the promising prospects at the Omega Boxing Gym. However, he was forced to rest after injuring his right shoulder in his fight with Carlo Demecillo in Dec. 16, 2017 in Catmon, Cebu.

Because of his injury, Aliasot became a boxing trainer at the Gladiator Gym in Talamban.

Aliasot didn’t hesitate and immediately jumped on the opportunity to return to ring after he was given an offer by boxing promoter Jossel Wild.

“Wild gave me the fight. She contacted me on short notice but it’s okay. I’m still ready to fight,” said Aliasot.

Aliasot admitted he may have ring rust after not fighting for two years. But he’s convinced that his experience and hunger will give him the edge.

“I think I’m 85 percent back,” said Aliasot. “I’ll do everything to win. I have a slight edge on experience.”

Aliasot has been getting some quality sparring at the famed ALA Boxing Gym. He has been sparring with former world title challenger Jonas Sultan, Boyce Sultan and world-ranked Jeo Santisima.

Carcosia should be a stiff assignment for Aliasot. The former has heavy hands and is one of Sanman Gym’s up-and-coming fighters. The 23-year-old is coming off a third round stoppage over Renan Portes.

Aliasot is 6-2 with five knockouts, while Carcosia is 6-0-1 with six knockouts.