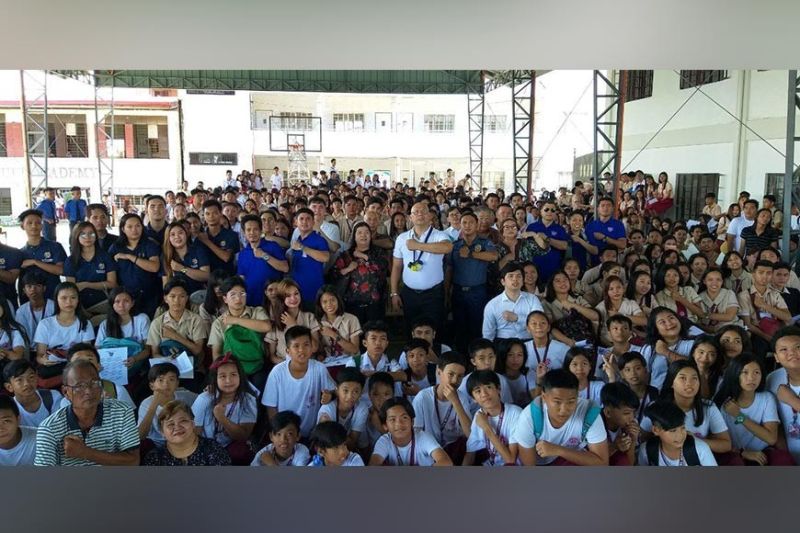 Some 700 students belonging to Grades 10, 11 and 12 attended the event, which was organized by Patrol as an outreach activity to prepare Masantol’s young population for future challenges by teaching them the concept of leadership, disaster management, and the anti-drugs and anti-criminality campaigns of the government, all in keeping with Patrol Party-list’s advocacy.

A retired police officer and a native of Masantol himself, Bustos was the program’s brainchild and main guest speaker, as he emphasized that leadership is a calling “beyond age and stature.”

“As a son of Masantol, I have been given the opportunity to serve my people as a policeman, and now as a PATROL-man in Congress. I know by doing this (youth leadership summit), I will nurture in you the realization that for as long as you have the will to serve, you all have the capacity to lead and make a difference for our beloved hometown,” he said.

Bustos was joined by Patrol members and experts, Dr. Isabel Lanada and Police Lieutenant Colonel Jason San Pedro, who demonstrated the importance of disaster preparedness and crime prevention, respectively, in enriching the lives of the youth so that they can readily “give back” to their community. Masantol Municipal Councilor and teacher by profession, Ronald Flores, also acted as the overall coordinator and convenor of the summit.

Many of the participants felt “very privileged” to have attended the said event, saying that they “learned a lot,” and was “inspired to take seriously the many challenges” they are facing, so that they can “follow on PATROL’s purpose in leading their community,” to make it “safer and more prepared for disasters and calamities.”

Bustos founded Patrol in 2015, primarily to convene professionals, volunteer groups and NGOs advocating public safety, security, and crime prevention. As of the moment, they are expanding their membership to people and organizations, including the youth, to take on the common aspiration as Patrol’s.

In an earlier statement, Congressman Bustos said Patrol aims to “reach out to all sectors of society, and shall continue to push for policy reforms on crime prevention and disaster preparedness”, all aligned to the organization’s slogan: “Gusto ko, safe ka!” (Chris Navarro)