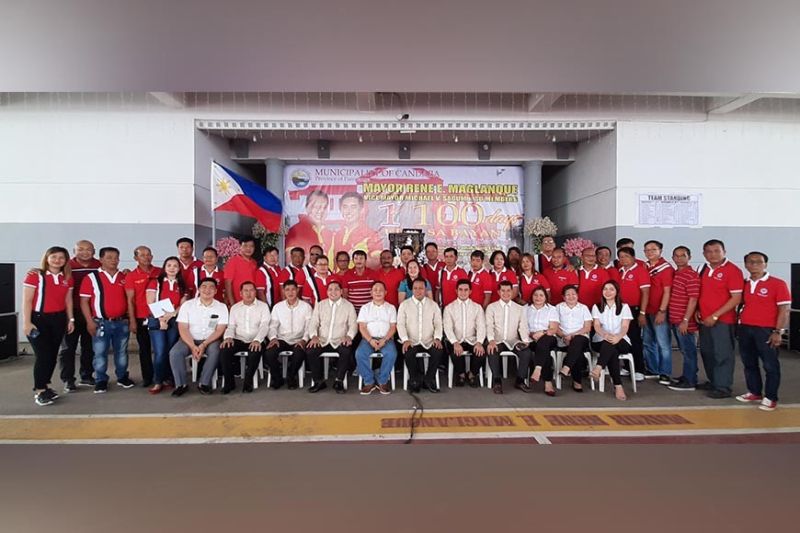 Maglanque said the new slogan, which read “Tulung-tulong sa Pagsulong,” is fit on the kind of governance his administration will practice for the rest of his term.

“Hindi ko po kaya itong mag-isa kaya hinihingi ko ang inyong tulong upang mas mapaunlad natin ang Candaba (I cannot do this alone that is why I am asking for your help to develop Candaba),” the first-termer mayor said when before he ended his accomplishment report.

Maglanque urged political foes, who were retained in their positions in the local government, to prioritize public service for the betterment of Candaba and its people.

(Let us set aside politics instead work for the Candabeño. I am returning to office with a pure heart and clear mind to serve each one of you and to develop Candaba. Let us all help in improving this town)

Meanwhile, Maglanque relayed to his constituents some of the major accomplishments of his administration since he assumed his post more than three months ago.

This includes the forthcoming opening of Don Honorio Ventura State University satellite campus in town, construction of Philippine National Police and Bureau of Fire Protection buildings, and turnover of a senior citizen lounge to the local government – all negotiated under his term.

The agriculture sector was also given priority through the granting of cash loans amounting to over P6-million to 400 farmers, distribution of certified seeds and lending of farm machineries to farmer groups.

The local government was also able to garner a 95-percent grade from the Department of Interior and Local Government for the road clearing operations ordered by President Rodrigo Duterte.

Moreover, the continuous development of the Candaba Infirmary Hospital is also among the priority of Maglanque to ensure the quick delivery of health service Candabeños.

On his first 100 days, the local government was able to acquire donations of medical equipment, including an ultrasound machine, from Department of Health and partners from private sector.

At least P10-million of cash assistance were also given to underprivileged college students in town under the local government’s scholarship program.

Maglanque credited the numerous accomplishments under his term to the support of his fellow local government officials and employees, and the guidance of Governor Dennis Pineda and Fourth District Representative Juan Pablo “Rimpy” Bondoc.

“These are the products of the strong partnership between local, provincial and national government officials. We are positive we will be able to do more through the support and cooperation of everybody,” he said.