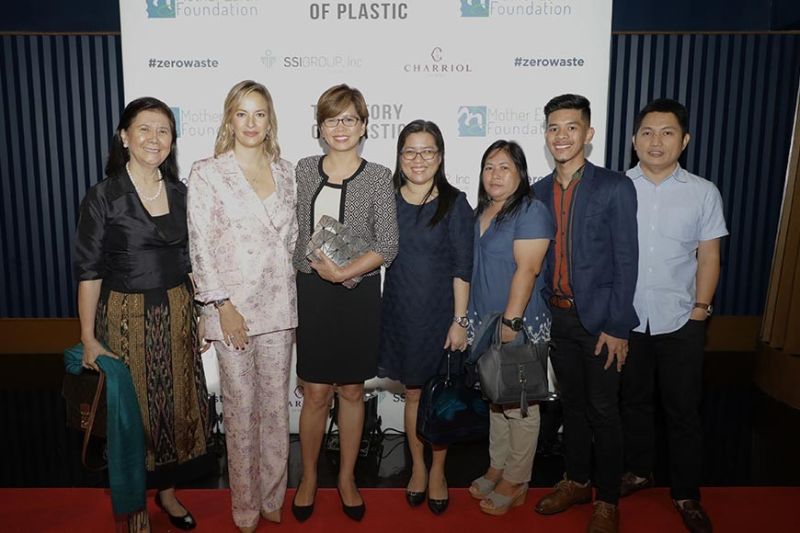 PAMPANGA. Personnel of the City of San Fernando Environment and Natural Resources Office grace the screening of international documentary on plastic pollution, “The Story of Plastic,” on October 10, 2019 at the Central Square, Bonifacio Global City, Taguig. Joining them are Coralie Charriol, the film’s executive producer, and Mother Earth Foundation Chairperson Sonia Mendoza. (Photo by CSF-CIO)

THE actions of the City Government of San Fernando toward being a “Zero Waste City” were featured in an international documentary on plastic pollution entitled “The Story of Plastic.”

The said documentary had its Philippine screening last week at the Central Square in Bonifacio Global City, Taguig, after its premiere in the United States of America.

Gracing the event, on behalf of Mayor Edwin Santiago, was City Environment and Natural Resources Office (Cenro) hed Regina Rodriguez, together with other Cenro personnel.

According to Rodriguez, the feature was made possible through the help of one of the city’s partners in doing its zero waste actions – the Mother Earth Foundation (MEF), which also co-hosted the said screening.

MEF president Froilan Grate highlighted in the film the promising accomplishment of San Fernando in attaining an almost 80 percent waste diversion rate and its positive impact on financial aspect. “Out of Zero Waste Program, San Fernando would be spending P70 million per year just to collect their waste and dump in a landfill.

With the Zero Waste Program, they were able to reduce it to P12 million. That translates to about P58 million savings,” Grate imparted.

In an interview, MEF Chairperson Sonia Mendoza explained that the said rate was the highest in Asia and was reached because the city has a Zero Waste Program, which includes the practice of segregation-at-source, regular collection of segregated wastes, composting of organics, and recycling.

Through these actions, the city now only dumps about 20 percent of its waste in a landfill. In the film, Santiago said that the implementation of the program is the sole solution in dealing with waste problems.

“There’s only one solution to manage garbage problems – the implementation of Zero Waste Program. This program has been making a positive impact for the city in the economic and environmental aspect,” the city mayor explained.

Produced by the US-based organization The Story Stuff Project, “The Story of Plastic” aimed to present a number of global waste problems being experienced by the people at the moment and feature environmental initiatives of several individuals, groups, and public and private institutions from different parts of the world.

Also present during the screening was the film’s executive producer Coralie Charriol, together with other officials from its partners- SSIGroup, Inc. and MEF.

Meanwhile, Santiago is currently in Penang, Malaysia, for the two-day International Zero Waste Cities Conference 2019 as he is presenting the city’s Zero Waste actions to thousands of delegates from different parts of the globe. (PR)