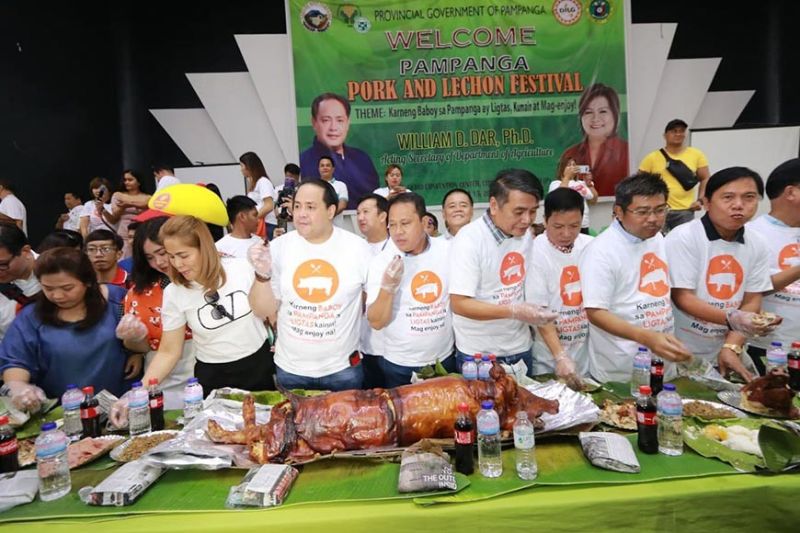 PAMPANGA officials sent a clear message on Tuesday, October 15, that it is safe to eat pork and other processed meat during the Pork and Lechon Festival as the province downplayed fears on the African Swine Flu (ASF).

The Bren Z. Guiao Convention Center in the City of San Fernando was packed with village, provincial officials and other stakeholders as 50 roasted pigs were served along with hundreds of meat products like tocino and hotdogs among others.

The event was hosted by Governor Dennis Pineda and the livestock sector of Pampanga in a bid to inform the public on the real situation of the livestock industry in the province.

Governor Pineda said that current culling operations in Pampanga are part of quarantine operations and preventive mechanism and does not necessarily confirm incidents of ASF.

“Pigs and pork products from Pampanga are safe to eat,” Governor Pineda said, stressing that people have nothing to fear about meat products coming from Pampanga.

As for ASF, Governor Pineda said that the province is implementing all necessary preventive measures.

“Any confirmation comes from the Department of Agriculture,” he said.

The event was in partnership with various swine producers and processors in Pampanga. The event highlighted the need for consumers to be vigilant in the purchase of meat products to ensure safety. Buyers from public markets are advised to look into the meat inspection certificates of their sellers.

Governor Pineda said that Pampanga’s processed meat products are safe. Meat processors in Pampanga mostly source their pork from abroad which are certified safe from ASF by national and foreign meat inspection agencies.

Meanwhile, the Department of Health here reminded the public that meat must be cooked properly. ASF, according to the DOH, is not a risk to human health.