Cardinals, Jaguars hand Atoms back to back loss in BBEAL 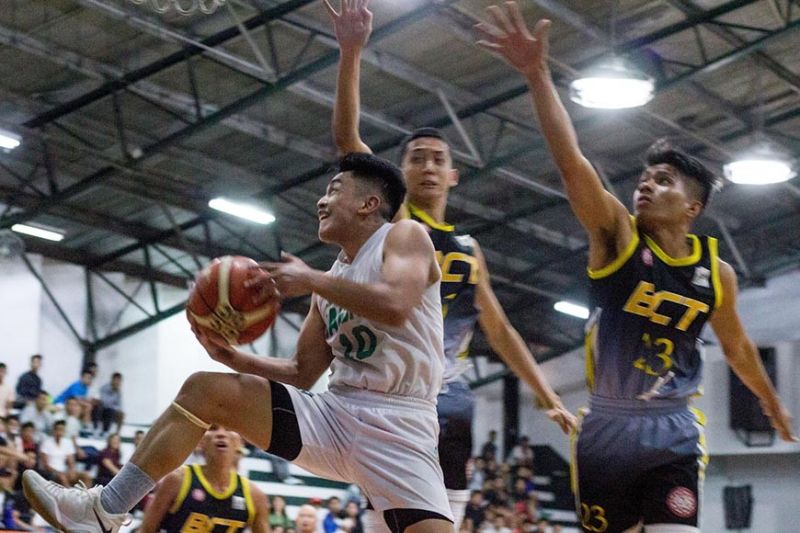 BAGUIO. University of the Cordilleras (UC) Jaguars dubbed as this year’s underdog in the BBEAL men’s basketball is off to a good start after beating the Baguio College of Technology (BCT) Atoms on Sunday, 89-77. (Photo by Jean Nicole Cortes)

The Cardinals disposed the Atoms, 66–53 on Saturday at the UC gym with Claude Leymark Camit firing away 19 points shooting five triples to lead all scorers in the ball game.

BCT started strong as it ended the first quarter with a one point 16–17 advantage before the Cardinals pressed on the pedal and limiting the Atoms to only 11 points in the second quarter to take a 31–28 lead at half time.

With a three-point lead going into the third period, the Cardinals went on to cruise control as they thwarted any comeback bid by the Atoms.

Bheniedick Lozano and Efren Dela Cruz chipped in 11 markers each for the defending champion while Daryll Jan Torio led BCT with 13 points as Lito Villanueva and Elijohn Serapion added nine and seven apiece.

UB coach Joel Flores, despite the win said the team needs to have their winning mindset every game.

Flores added all schools are eyeing to dethrone the Cardinals saying his team needs to step up their game if they want to retain their title.

The Jaguars meanwhile compounded BCT’s problem as it handed the Atoms its second straight loss for the season, 91–77, Sunday afternoon also at the UC gym.

BCT again started strong, leading the ball game, 21-22, at the end of the first quarter but UC went on a tear outscoring their rival at the close of the first half and enjoy a 46–44 advantage.

UC was never challenge again as they earn their third straight win after three Jaguars scored more than 20 points led by Christian Goesep Valdez with 21 and the pair of 20s from Jerome Meamo and Lydon Matbagan.

Serapion led the Atoms with 19 against UC while Villanueva and Timothy Miley added 15 each.

Villanueva, who is now on his third year as an Atom sees the loss as a wakeup call for the team.

Coach Jaynard Elegino, who has taken over the reins of former head coach Willy Antonio added the team is currently lacking in maturity and experience as seven in his line – up are rookies.

The Jaguars, meanwhile, hope to carry their momentum in the succeeding game as they try to adjust, particularly with their in–game communication and boxing–out in rebounds.

Zapanta added they are eyeing a slot in the final four this year after a dismal performance in season 32.

Despite enjoying a six point lead at the close of the opening period, 13–19, the Cavaliers failed to sustain their momentum in the succeeding quarters as it was limited to only eight points in the third canto.

Justin Paul Madriaga and Jed Aione Barrientos combined for 21 and 20 points each to lead the Navigators as Karlo Alexis Marquez contributed 15 markers.

PMA meanwhile leaned on Mark Markkus Torres with 21 while Vincent Joshua Maglasang and Alfons John Tumanda chipped in 18 and 11 points each. (With Roderick Osis)