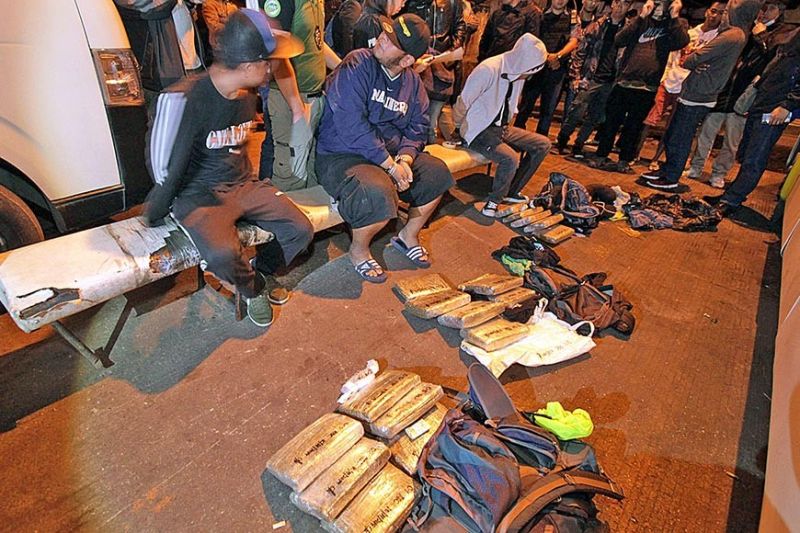 BAGUIO. Three tourists from Antipolo were caught carrying some 17 bricks of dried marijuana in a drug bust at a bus station in Slaughter Compound Monday evening, October 14, 2019. Authorities tracked the suspects and waited for them to arrive in the city from Bontoc before arresting them. (Photo by Jean Nicole Cortes)

THREE suspected illegal drug couriers were arrested by police for possession of close to P3 million worth of marijuana around 10:10 p.m. of October 14 in a bus terminal at Slaughter Compound, Barangay Sto. Niño, Baguio City.

According to a report from the Baguio City Police Office (BCPO) Station 2, the suspects were identified as Samuel Flor Christian Baldovino, 21; Joseph Buna Obra Brizuela, 22, student; and Rhyjen Rodriquez Hernandez, 24, all residents of Antipilo City who rode on a bus from Bontoc, Mt. Province going to Baguio City.

Inventory of confiscated pieces of evidence were conducted onsite while the suspects together with the pieces of drug evidence was brought to the PDEA Regional Crime Laboratory Office-Cordillera for drug test and chemistry examination.

Meanwhile, a high-value target pusher was arrested in Abra Province on Sunday.

Dennis Millare Montorio and “Janice” were arrested in Barangay Lingtan, Bangued, Abra in the early morning of October 13.

On October 10, P576,000 worth of abandoned marijuana was recovered in Sitio Kesat, Bontoc Ili, Bontoc, Mountain Province in the afternoon of October 10 by joint operatives of PDEA Mt Province, RIU-14, PDEU and Bontoc Municipal Police Station.

“We will continue to seek reductions and eventually totally cut the supply of drugs that come from the Cordillera mountains,” added Dickson. (Jonathan Llanes)