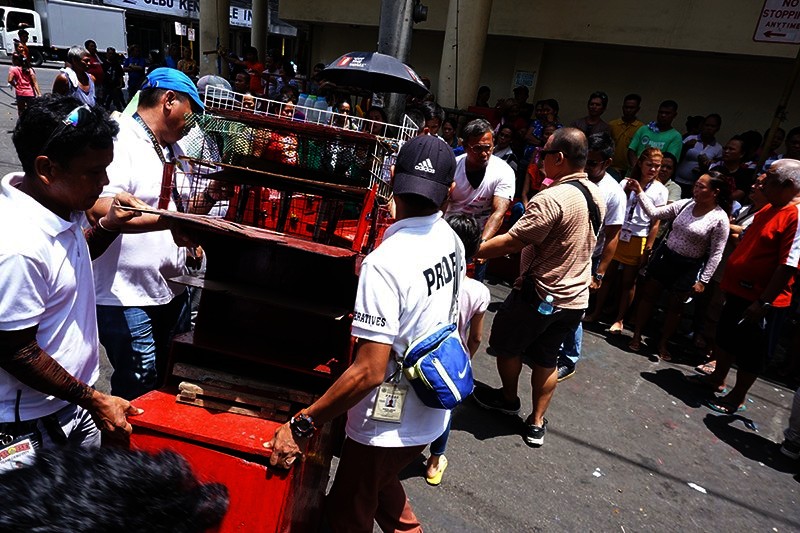 THOSE planning to go to the Basilica Minore del Sto. Niño to buy religious images will have to walk a block away from the church beginning Thursday, Oct. 17, 2019, after the Cebu City Government removes the vendors’ stalls.

Vendors at the back of the basilica on D. Jakosalem St. in Barangay Sto. Niño are the latest casualty of the City’s clearing operations to rid major roads of illegal structures and obstruction.

Prevention, Restoration, Order, Beautification and Enhancement (Probe) chief Raquel Arce said the vendors were given on Monday, Oct. 14, 2019, a warning and notice to voluntarily remove or clear their illegal structures.

The vendors were given three days from receipt of the notice to remove their stalls and structure in the area. If they refuse to do so, Probe may take legal action against them. The vendors have to move out by Thursday.

Arce said the pilgrims do not have to worry as the relocation site on F. Gonzales St. is only one block away from the church.

She assured that the vendors will not cause obstruction on F. Gonzales since the street has a wider sidewalk than D. Jakosalem St.

The vendors, however, can return to the area behind the church on Fridays and Sundays when the roads near the Basilica are closed.

Arce observed that pedestrians can no longer use the sidewalks because of the structures built by the vendors in the area.

“There are days when the stalls are closed, but the public still can’t use the sidewalk because of the structures,” she said.

Arce said that even if the vendors are allowed by Basilica officials to sell in the area, she still has to implement the memorandum issued by the Department of the Interior and Local Government (DILG) to clear the public roads of any obstruction.

She shared that she was questioned by the DILG during the final validation inspection on Oct. 4 why the area around the Basilica was not cleared yet.

Arce said she will meet industrial designer Kenneth Cobonpue today to discuss the latter’s offer to design the stalls for the vendors in a way that will not cause obstruction in thoroughfares.

With the “medium compliance” rating of Cebu City, Arce said she was challenged to do more in reclaiming the public roads to comply with the directive of President Rodrigo Duterte.

The DILG released the results on Oct. 11, showing that six towns and one city in Cebu failed. (JJL)